This review of this Belgian abbey-style beer from Lowtide Brewing Co includes tasting notes and info on ingredients, calories, carbs, sugar and stockists.

In the last few years, low and no brewers have cracked every style from lager to stout to hoppy pale ale to sours.

At best, non-alcoholic beers styled as best bitters are pleasant – but taste and smell nothing like they should. At worst, they’re no better than a glass of unfermented wort.

What’s this got to do with Lowtide Brewing Co’s “Brune-DMC”. After all, this beer is styled as a brown Belgian abbey beer, not an English bitter.

First, let’s rewind a little and take a look at Lowtide Brewing’s background. It’s a UK-based operation and born out of an online shop that specialised in NA beers, “Crafty AF”.

And it was owners Rob and Dave’s experiences of sourcing an ideal NA beer that led them to start brewing their own as Lowtide.

Now, the Crafty AF store is no more, leaving Rob and Dave to concentrate their efforts on brewing anything from pilsners to NEIPAs. Each can comes with distinctive artwork from their chum, John Miles.

The term abbey beer refers to a group of styles, rather than a specific one. Beers using this term are usually produced using similar ingredients and processes to those used traditionally in abbey and monastery breweries. But there’s no formal definition.

One essential ingredient in a Belgian ale is surely Belgian yeast. And that is the case here.

The grains are malted barley, oats, rye and wheat. The barley malt varieties are Pilsner, Caramunich and Special B, a dark malt found in many Belgian ales.

The hops are all European varieties – Saaz, Magnum and Goldings.

Saaz hails from the Czech Republic and is a common hop in European lagers. Magnum is a German hop, known for its citrus and spice aromas. Golding is also known for spicy flavours, hailing from the UK.

Brune-DMC is suitable for vegans but it’s not gluten free.

There’s no nutritional information about this beer on the packing, so it might be one to miss if you’re counting the calories or watching your carb or sugar intake.

Brune-TMC pours pecan in colour, with loads of foam that takes a while to settle without an expert pour (i.e. how I pour). It has a slight haze.

The aroma is gorgeous. It’s sweet and malty, with roasted barley, chocolate, floral hops, sage, vanilla and honey sitting on an earthy base.

The aroma reminded me of a great cask bitter, minus a subtle fruitiness.

The foam signalled it’s softly carbonated. And that’s certainly the case on sipping. Again, it’s reminiscent of a cask bitter with a slight tickle as it goes down.

The body is good, helped by the haziness. But it’s probably a touch lighter than the equivalent full-strength beer.

As with the aroma, the flavour on tasting doesn’t disappoint.

A slight sweetness is punctuated expertly by a growing bitterness. It has a roasted barley backbone with many of those flavours featured in the aroma – chocolate, vanilla and honey.

The chocolate is particularly noticeable. As with the aroma, there’s little in the way of citrus or fruit flavours.

The bitterness lasts long into the aftertaste. It might be a bit overwhelming to sensitive palates by the end of the serving – like, you guessed it, a good cask bitter.

OK, I know Brune-DMC is styled as a Belgian brown ale. And it does a superb job in that style, minus maybe the presence of a little more spice in the flavours.

But I think it’s also a beer that will please fans of cask bitter with its sweet and bitter flavours and gentle mouthfeel. 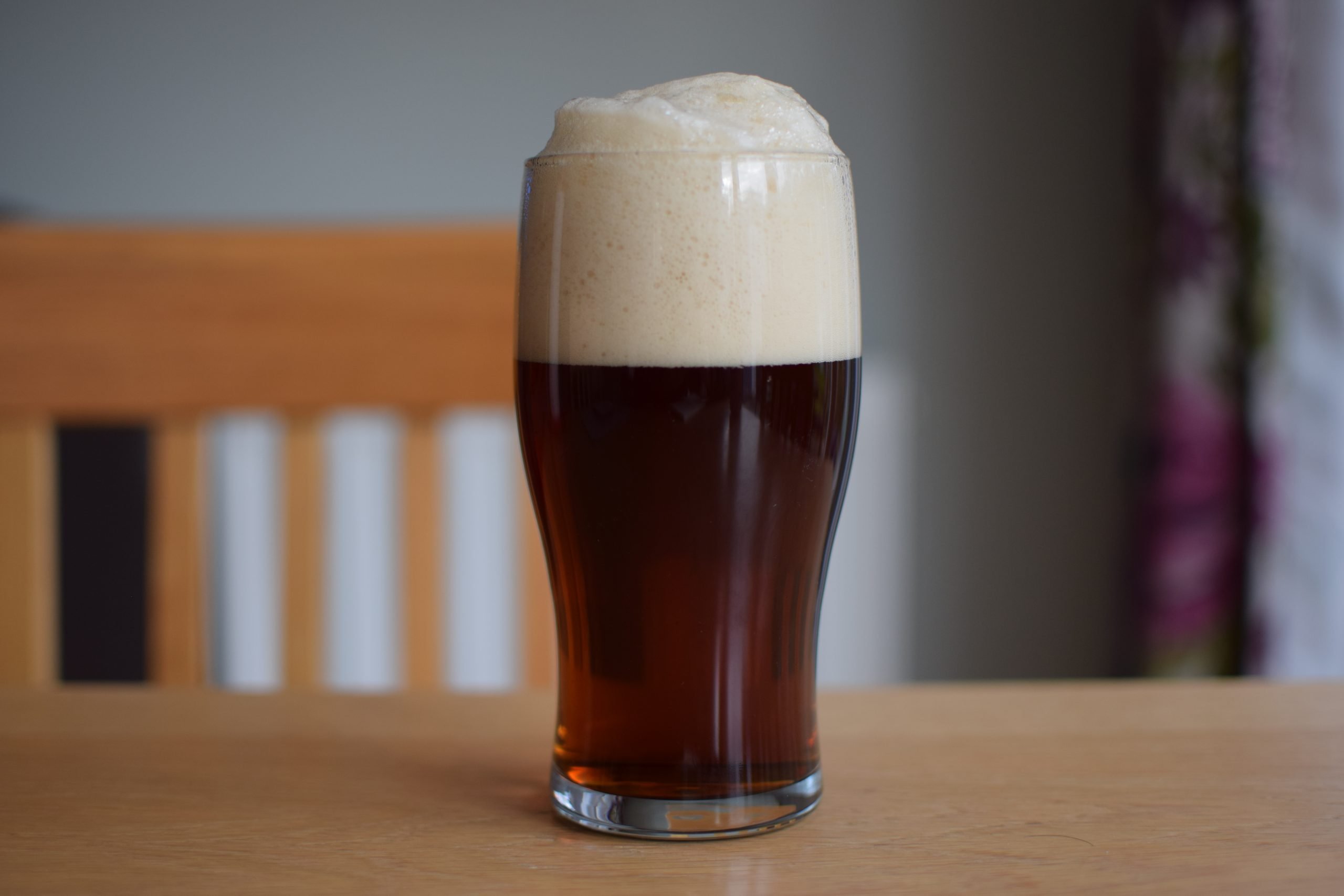