Nirvana “Kosmic” is a 0% stout-style alcohol-free beer. Get tasting notes, nutritional info and find out where to buy in this review.

Until I discovered high-ABV imperial stouts, I wasn’t really a fan of dark beers. And, although I’ve enjoyed a few lower-ABV stouts, I was always a big believer that the best ones have to be big on alcohol content.

My laughable view on the perfect ABV of a stout was finally disproved when I sampled Big Drop Brewing Co’s (imaginatively titled) “Stout” (0.5%). This is one of the beers that convinced me that low-alcohol and alcohol-free beers can be great. On the flip side however, Super Bock’s “Preta” (0.45%) stout was a little disappointing.

Another non-alcoholic stout on the market is “Kosmic” from Nirvana Brewery. Nirvana is a specialist low-alcohol brewer and Kosmic is one of two 0% beers it produces along with “Tantra”.

Kosmic looks exquisite, almost black, when poured. With its caramel-coloured head, it demands to be drunk.

The initial aroma is reminiscent of other 0% beers that haven’t had the alcohol removed after fermentation. It’s worty and bready, with a slight sweetness. A little of the roasted malts slide into the aroma after a few deep sniffs. But there’s no sign of the chocolate or vanilla.

There’s less wortiness and breadiness in the flavour, which is less intense and less sickly than other 0% beers. There’s a little liquorice and treacle, which adds interest. Again though, I failed to detect the chocolate and vanilla promised in the tasting notes. The wortiness fades the more you drink.

The mouthfeel is good and not unlike a 4 or 5% stout. It’s lightly carbonated and has the tingle of a cask-conditioned ale rather than a bottled beer.

There’s a classic dry finish, much like what you get when eating dark chocolate.

This is a decent example of a 0% beer, and is much more drinkable than other 0% beers like St Peter’s “Without Original” and Innis and Gunn’s “Innis and None”.

However, with worty, bready aroma and taste, and lack of roasted malt in the smell and taste, I doubt I’ll return to this when I’m in need of an alcohol-free stout. 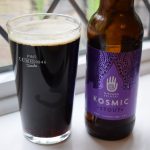