“Preta” is a low-alcohol stout from Portugal’s Super Bock brand. Get tasting notes, nutritional info and stockist info in this review.

If you’ve been on holiday to Portugal, you’ll probably be familiar with Super Bock – it’s been the market-leading beer brand in Portugal since the early 90s.

Owned in part by Carlsberg, the brewery produces two non-alcoholic beers – a stout called “Preta” (black) and a pilsner.

Preta comes in at 0.45%. It uses three malts (chocolate, pale and caramel). It also features unmalted maize, presumably to add extra flavour and body. There’s added colouring too. So it’s not the most natural of beers.

When poured, Preta looks more like a black IPA or porter than a stout. There’s a decent head, but it fades quickly.

There’s a clean, malty aroma. It smells quite lagery. But the aroma is disappointing overall for what’s supposed to be a stout.

In the mouth, this beer is very thin for a stout. But it’s not too watery and rivals higher-strength beers for consistency. Carbonation is low, but it’s not flat.

The malt from the aroma carries over to the taste and gets stronger the more you drink. There’s a smidgen of coffee in there too.

There’s also a metallic twang with a little sourness.

The bitterness is well-balanced. But this is quite a dull-tasting beer, especially when compared to Big Drop Brewing’s 0.5% stout.

This beer is drinkable and not unpleasant. It’s a decent alternative to a soft drink if nothing else is available.

However, it’s probably not worth seeking this one out if you have other non-alcoholic beers available. 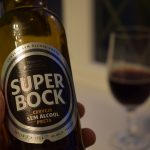