Ambar “0.0 Gluten-Free” is a gluten-free (obvs) non-alcoholic lager. Get tasting notes and info on stockists, ingredients and nutritional content in this review.

Market demand coupled with better access to gluten removal techniques means it’s now much easier to find gluten-free non-alcoholic beer. This is beer made from gluten-containing grains like barley that meet the widely accepted gluten free definition of less than 20 PPM (parts per million).

But this hasn’t been the way. Hence why Spain’s Ambar brewery was able to lay claim to producing the world’s first non-alcoholic gluten-free beer as recently as 2011, modifying the process and recipe in 2015.

It has a history of firsts in the non-alcoholic space to be fair. In 1976, it produced Spain’s first non-alcoholic beer with the slogan, “Drinking double the amount without seeing double”.

Following that pioneering act, other Spanish brewers followed suit. Now, non-alcoholic beer accounts for around 15% of beer sales in Spain (it’s around 1% – but growing quickly – in the UK).

How Ambar 0.0 Gluten Free is made

So how does Ambar make this beer non alcoholic and gluten free?

My guess is that the brewery creates a standard beer and removes the alcohol through a technique like reverse osmosis or vacuum distillation. This leaves little to no trace of alcohol.

To remove the gluten, Ambar uses enzymes that breaks it down, destroying the element that interacts negatively with the body.

These enzymes are often the same ones used by brewers to prevent what’s known as a chill haze forming in their beers when they’re cold. So it’s possible there are many beers out there that meet the 20PPM definition of gluten free – it’s just that brewers haven’t had their gluten levels tested.

There’s bit of a hodgepodge of ingredients in this one. As well as water, hops and barley malt, Ambar 0.0 Gluten Free features isomaltulose (a sugar composed of glucose and fructose), rice, dietary fibre, and natural flavouring.

It doesn’t sound too appetising. But it’s a far cry from some of the chemicals that pop up on the ingredients lists of other soft drinks.

Ambar 0.0 Gluten Free pours clear amber, with a touch of white head that leaves a little lacing and tight bubbles.

I wasn’t a fan of the initial hit of aroma, as it reminded me of the smell that welcomes me when my ageing Border Terrier Tilly has had a wee on the carpet. Luckily, that flowery ammonia smell soon moves aside for a woody, spicier aroma. And soon you can’t detect it at all – just as well.

The mouthfeel features a sharp fizziness that makes itself known when it passes over your tongue and down your throat. The body is medium and soft, taking the edge off some of those jagged bubbles.

The flavours on tasting don’t start off on the wrong foot like in the aroma. A strong and sweet roasted maltiness gets backing from more spicy, woody flavours. There’s only a scuff of bitterness at the end of each sip to mask the sweeter flavours, making it a bit sickly after a time.

That’s eat for the flavours – it’s a bit dull really.

Ambar 0.0 Gluten Free is drinkable and might have been a premier choice for a gluten-free non-alcoholic beer a few years back.

Now though, there are better options if you’re happy to accept beers with gluten under 20PPM – beers from Big Drop and Drop Bear spring to mind.

If there’s nothing else available though, give it a try. It’s a better choice than a sugary soft drink, that’s for sure. 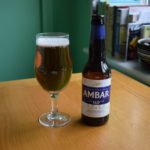