Beck’s “Blue” is an alcohol-free (0.05% ABV) pilsner-style beer produced in Germany. In this review, get tasting notes, information on carb, sugar and calorie content and find out where to buy it.

One story that shows how my attitude to alcohol-free beer has changed over the years is when my girlfriend – now wife – bought me a four-pack of the non-alcoholic Beck’s “Blue” beer by mistake.

Oh how we laughed… for near on 15 years, because I reminded her about it every time I bought a pack of beer.

Now she reminds me about it each time I sip on an alcohol-free beer.

Another point this story illustrates is how long Beck’s Blue (also known as Beck’s Non-Alcoholic) has been around in the UK.

This all happened around 2003. And that was still a decade after the Bremen-based brewery created this alcohol-free pilsner-style lager in 1993.

This early faith in non-alcoholic beer paid off, in the UK at least. Here it’s a staple in the beer coolers of many a pub up and down the country. It still accounts for more than a third of all alcohol-free sold in the UK.

Despite its status as a big brewing corp beer (Beck’s is owned by Budweiser producer, AB-Inbev), you could argue that Beck’s Blue deserves its success because it took a chance on alcohol-free beer when nobody else cared.

Not that a bottle or can of Becks Blue has ever been in my grasp. Despite sampling almost 100 alcohol-free beers over the past 18 months or so, I still hadn’t tried it until this review. Which begs the question, what happened to that four-pack in 2003?

It’s probably still in the kitchen cupboard at my student house.

How is Becks Blue made and is it completely alcohol free?

The brewers make Beck’s Blue by brewing a standard beer, then gently removing the alcohol after fermentation.

This leaves a beer with only trace amounts of alcohol if any – up to 0.05%. This is less than what occurs naturally in many types of food.

However, it’s worth bearing in mind that it’s possible the alcohol content could be higher because labelling rules vary between regions and some countries like the UK allow a small tolerance to what’s shown on the label.

So you may want to speak with a health professional before you drink Beck’s Blue if you’re pregnant or have a health condition that means you need to avoid alcohol, just to be on the safe side.

Beck’s Blue is produced in Germany, so conforms to the Reinheitsgebot (German beer purity law). So, unlike many other mass produced alcohol-free beers that contain natural flavourings and other nasties, Beck’s Blue’s ingredients simply consist of water, barley malt, yeast and hops. This means it’s suitable for vegans too.

That said, it’s unlikely to use the same recipe as standard Beck’s, as the dealcoholisation process strips out a lot of flavour.

The carb and sugar content – 10.2g of carbohydrates and 0.7g of sugar per 330ml bottle – is also low compared to similar beers such as Heineken 0.0.

Beck’s Blue pours an amber colour with a generous amount of white froth, which outlasts the beer in the glass, leaving lacing as it goes.

The smell is sweet, malty and clean with straw and lemon aromas appearing as it warms in the glass.

It’s slightly syrupy but the body isn’t too bad. It’s highly carbonated but the foam gives it a creamy – dare I say luxurious – feel as it slips down your throat.

Flavour-wise, it’s a slightly harsh bitterness that hits your tastebuds first and hangs around until well after the sip. There’s none of the sweetness from the aroma, which could have worked nicely with the bitterness.

Naturally, there’s a good dose of pale lager malt in the flavour too. And some of that lemon that featured in the aroma. It’s lacking a little bit of pizazz, but is far from a bore even if it’s a bit watery at the end.

In my experience, Beck’s Blue has a bad reputation. So I was surprised at how drinkable it is.

Sure, it’s not the best alcohol-free lager out there. But it’s a decent option when you’re not drinking alcohol, especially since it’s available in so many pubs and bars.

That said, the high bitterness might be an issue for some. 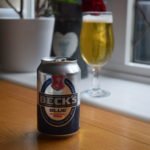