Brooklyn Brewery “Special Effects” is a dry-hopped low-alcohol (0.4%) American amber lager. In this review, find out how it tastes, how it’s made and where to buy plus see nutritional info including calorie, carb and sugar content.

The Middle East – where alcohol is either banned completely or difficult to get hold of – doesn’t seem like the obvious place to learn how to brew beer. Yet that’s where Steve Hindy, co-founder of New York’s Brooklyn Brewery, was first introduced to brewing.

Steve was based in the Middle East as a correspondent for Associated Press in the late 70s and early 80s. In Egypt, he befriended an American diplomat who, unable to get hold of any alcohol on his previous post in Saudi Arabia, was an avid – and talented – home brewer.

Surprised at the quality of the diplomat’s home-brewed beers, Steve then started making his own beer when he returned to New York in the mid 80s. Eventually, he partnered with his neighbour Tom Potter, raised a few hundred thousand dollars and set up the Brooklyn Brewery in 1988.

Steve and Tom first distributed their beers locally. Now they’re available across the USA and throughout the world, including Dubai – one of the few Middle East countries that allows the sale of alcohol, albeit to non-Muslims only.

For years, Brooklyn Brewery focused on beers around the 5–9% ABV mark.

Now it’s produced its first alcohol-free beer. Not that it could sell it in all of the Middle East countries that its founder used to frequent – “Special Effects” comes in at 0.4% ABV, which is still considered alcoholic in some Muslim countries despite it being around the same ABV as many foods.

How is Special Effects made?

Special Effects is an American Amber Lager, so it’s made with bottom-fermenting lager yeast. The malts are Caramel and Munich and it’s dry hopped with the American Mosaic, Citra and Amarillo hops, all known for their intense aromas.

Instead of removing the alcohol after fermentation, Brooklyn have used a lazy yeast and a malt bill that doesn’t produce much alcohol.

Special Effects comes in a US-sized 355ml bottle. It pours clear and golden brown, clear. A head foams up initially then leaves a few bubbles on top, which cling to the side of the glass with every sip.

The smell is understated with a sweet, tropical base and a little maltiness floating in the background. Opposite the tropical flavours is a hint of herbiness, which gives it an interesting and varied aroma. The herbs grow stronger on the nostrils the more you drink.

In the mouth, the body is good – far from watery – with a tickle of carbonation as it goes down. The hops added late to this beer probably thicken up the mouthfeel.

As with the tropical aroma, the flavour isn’t typical of a lager.

Initially, it’s sweet and fruity with a taste of lychee and caramelised orange. Then some caramel maltiness drifts in to complement the modest bitterness that you get at the end of each sip.

Special Effect is an above-average low-alcohol beer, which will likely appeal to pale ale fans more than lager drinkers.

The aroma is nicely balanced between sweet fruit and savoury herbs and there’s a decent amount of variety in the flavours too.

My only qualm is that it’s quite sweet and lacks bitterness. But this might only be an issue for you if you plan to knock a few back in a session. 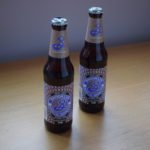