“Cheers Branca” is a Portuguese pale lager from the Super Bock brewery. Get tasting notes and info on calories, stockists, carbs, sugar and ingredients in this review.

Famed for its fortified wines, Portugal isn’t on many people’s radars when it comes to beer.

Traditionally, the beer scene is dominated by just two brands – Super Bock and Sagres – which focus mostly on pale lagers.

In recent years, they’ve been joined by a handful of craft breweries, which while not making much of a dent in the market have provided a little more variety for the country’s drinkers. This has also led to beer consumption among the Portuguese rising slightly in 2016 and 2017 after falling for the previous decade or so.

Both Super Bock and Sagres brew alcohol-free beers. The Super Bock group, which also sells bottled water, is also behind the “Cheers” brand of non-alcoholic beers and is part-owned by Carlsberg.

“Cheers Branca” is the brand’s lager-style beer, launched in the early 90s.

Made with unmalted maize and barley alongside the common ingredients of malted barley and hops, its nutritional values are a little higher than average – 26 calories, 5.8g carbs and 3.1g sugar per 100ml (this one comes in a 330ml serving).

Cheers Branca pours a straw colour, with a generous head that leaves a lacing trail down the glass as you drink – probably one of the intended results of those unmalted grains.

The aroma has a corny cereal flavour with a hint of sweetness and a touch of dried sage and a dab of ammonia. It’s one-dimensional – there’s no a lot going on here.

Branca’s body is pretty low to medium, so feels a bit watery. It’s crisp on the tongue despite smooth, frictionless carbonation. It leaves some stickiness in your mouth after each sip.

The flavour is corny and grainy with a touch of pale maltiness. But as with the aroma, there’s not much activity.

Bitterness is low but lasts a good time after each sip.

I get the impression Cheers Branca is a good metaphor for the Portuguese beer scene – it’s inoffensive and does a job when you need a beer, but you probably wouldn’t drink it unless you had to.

A bit more variety in the flavour and aroma, and it might have been a different story. I did really enjoy the soft carbonation though. 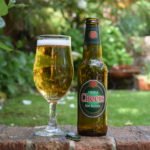