Free Damm is Catalan brewery Damm’s alcohol-free (0%) lager. Get tasting notes and info on ingredients, calories, carbs, sugar and stockists in this review.

One of the benefits of drinking alcohol-free beer is that – in many regions including the UK – producers of drinks under 1.2% ABV must list the ingredients on the packaging. So you know exactly what’s gone into your beer.

Meanwhile, pick up a standard beer and you likely won’t see a list of ingredients because producers of drinks over 1.2% ABV don’t have to declare ingredients or nutritional info.

There aren’t usually too many surprises when it comes to what’s in alcohol-free beer, with almost all brewers using the traditional ingredients of water, malted barley, hops and yeast with many also using traditional additions such as wheat, oats and lactose (milk sugar).

Now and again though, ingredients we might not be so familiar with pop up. One of these is syrup, specifically glucose-fructose syrup.

This is a heavily processed yet natural ingredient. It’s usually made from the starch in maize so is also often known as corn syrup. Glucose-fructose syrup (also known as isoglucose) is just one type, another being high-fructose corn syrup (HFCS), which is processed to contain a higher percentage of fructose (fruit) sugars to glucose.

Corn syrup gets a bad rap, mostly because it’s added to lots of processed foods and drinks as a sweetener or preservative but contains little nutritional value.

Corn syrup was also the subject of a Budweiser advertising campaign that called out rival brands for using it in their beers.

Not that this really matters. Corn syrup is just another way of adding fermentable sugars to a beer and only a small amount of this will make it to the final product.

If you prefer your beer brewed in the traditional way, fine – don’t touch beers that contain glucose-fructose syrup. Otherwise, there’s no reason to avoid beers that use it.

Best known for its flagship lager, “Estrella”, Damm has been brewing beer since the second half of the 19th century. An early and successful entrant into the non-alcoholic beer market, the brewery relaunched Free Damm in the UK with a new recipe in early 2018.

As well as glucose-fructose syrup and the traditional ingredients of water, hops and barley malt, the recipe for Free Damm includes maize and rice.

Brewers often use rice and maize to improve head retention and brew a beer that’s lighter in colour and flavour. Maize can also provide a smoother mouthfeel.

Unlike Damm’s full-strength “Daura” beer, Free Damm isn’t always gluten free – it seems to depend on where you buy it and where it’s produced. So check the label carefully if you need a gluten-free beer.

How is Free Damm made?

Free Damm starts life as standard lager. Brewers then use vacuum distillation, which reduces the boiling point of water and alcohol, to boil off the alcohol.

The brewery also says it has a system that puts the aroma lost during distillation back into the beer.

There’s no surprises in Free Damm’s colour and clarity – standard, clear amber. But it has a fluff of a head that you don’t normally see in a mass-produced beer.

There’s loads going on in the aroma. It leads with sweet light malts backed with grainy straw and lemon.

The body is good, with tight bubbles offering a tickle of carbonation and a smooth mouthfeel.

The flavour is similar to the aroma – malty, musty and lemony with a hint of cereal. There’s a bit more sweetness in the taste, backed with a slither of bitterness.

I quite enjoyed Free Damm. It has a classically clean aroma and taste with enough interest in the flavours to put it ahead of many of the other alcohol-free lager offering from European brewing corps.

The only negative was the sweetness in the taste, which could get a bit too much after a few cans. 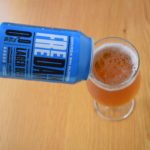