Kaliber is a non-alcoholic pale lager from Guinness. Get tasting notes, stockist info and nutritional info in this review.

Launched in 1986, it wasn’t the first alcohol-free beer on the market. But it’s probably the most well known thanks to an 1980s advertising campaign featuring Billy Connolly and its status as many pubs’ standard non-alcoholic beer offering before Beck’s Blue came along.

Nowadays it seems to be a beer that still sells itself, even though it has nothing like the near-monopoly it used to have on the non-alcoholic beer market. Guinness certainly aren’t throwing an advertising money its way – it’s not even mentioned on the Guinness website.

Despite its long history, I’d never tried Kaliber before. My only recollection of it is spotting a few bottles hiding on the bottom shelf of pub fridges. Anyway, it’s not exactly the coolest brand around is it? Which is perhaps why Guinness don’t make a song and dance about it.

I’ve read that Kaliber has its alcohol removed after fermentation but it’s got a whiff of wortiness that says otherwise when you open the bottle. After pouring, the aroma turns even more savoury with hints of biscuit. Then there’s a soapy smell, which gets stronger and more obvious with each whiff and eventually takes over the other aromas.

The mouthfeel is impressive but it left me with a syrupy coating on my tongue. It’s rather viscous, and more thick than you’d expect from a lager. Highly carbonated, there are tight bubbles that left me with a few burps post swig.

There’s a savoury vibe to the taste too. The wortiness continues with bready and caramel notes – few of the characteristics of a typical lager. There’s a sweetness in the flavour too. This gets too sickly after a few sips, despite the efforts of a little bitterness to balance things out.

I can see why Kaliber has a bad reputation. It has good body and mouthfeel. But the flavour and aroma – with that soapiness that overpowers everything else – letting it down. 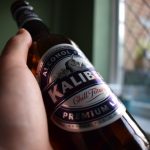