Veltins “Alkoholfrei” is a 0% pilsner-style beer from Germany. Get tasting notes and info on stockists, ingredients, calories, carbs and sugar, in this review.

Look into the backstories of the new breed of European craft brewers and you’ll find many of them found their inspiration following extended trips to the breweries of North America.

But European brewers have been finding inspiration in America for years.

Take the founder of Germany’s Veltins brewery, Clemens Veltins. In the 1840s, Clemens went on a six-year fact-finding tour around the world to research – and taste – the best beers. This included an extended period in Milwaukee, where Welsh and German settlers had recently opened the city’s first breweries.

Clemens had returned to Germany by 1852, when he took over a small guesthouse brewery in the north-west, giving it the Veltins name. Making use of the soft local water along with local hops and malt, the brewery specialised in Pilsner-style beers, which it continues to be well-known for today.

The brewery is still family-owned – Clemens’ great-great-granddaughter Susanne runs the brewery. But it’s no small-time producer. Veltins exports its beers to markets around the world, including to the UK and US. Its high-profile sponsorships include the FC Schalke 04 football team. And the technology it uses to produce its non-alcoholic beers reportedly cost €6 million (about £5.2 million or $6.5 million).

The brewery launched its “Alkoholfrei” pilsner in 2018 – late in a country where non-alcoholic beer is more likely to be a natural choice for those not drinking alcohol.

As expected in that massive tech investment, the brewery removes the alcohol from a standard-strength pilsner rather than brew a no or low beer from the off to make this 0.0% pilsner.

The recipe for Veltins Alkoholfrei adheres to the so-called German Purity Law so there’s no nasty stuff in this beer.

Along with water, the ingredients are barley malt, hops and carbonic acid drawn from the fermentation process.

The calorie, carb and sugar content in this beer is neither high nor low.

Veltins Alkoholfrei pours with a slight haze caused by a fair bit of yeast in suspension when you look closely. It’s straw-coloured, with a decent head and lasting beads of lacing.

There’s an overbearing smell of honey in the aroma, along with a touch of wheat, lemon and sweetcorn.

Later, the lemon morphs into a pleasant grapefruit tang, which helps simplify the aroma once your nostrils have got used to the other flavours.

The bubbles in Veltins Alkoholfrei are tight and would be harsh if it wasn’t for a soft mouthfeel.

The body is medium, and doesn’t giveaway its status as a non-alcoholic beer. And there’s no sense of those yeasty bits inside your mouth.

The honey returns in the flavour, along with a pistachio nuttiness and only the smallest touch of lager malt.

It’s sweet, with very little bitterness to reign it in. The honey persists in the aftertaste.

I wasn’t too impressed with Veltins Alkoholfrei. The mouthfeel and body are pleasant, but the aroma and taste – dominated by those honey flavours – put me off. 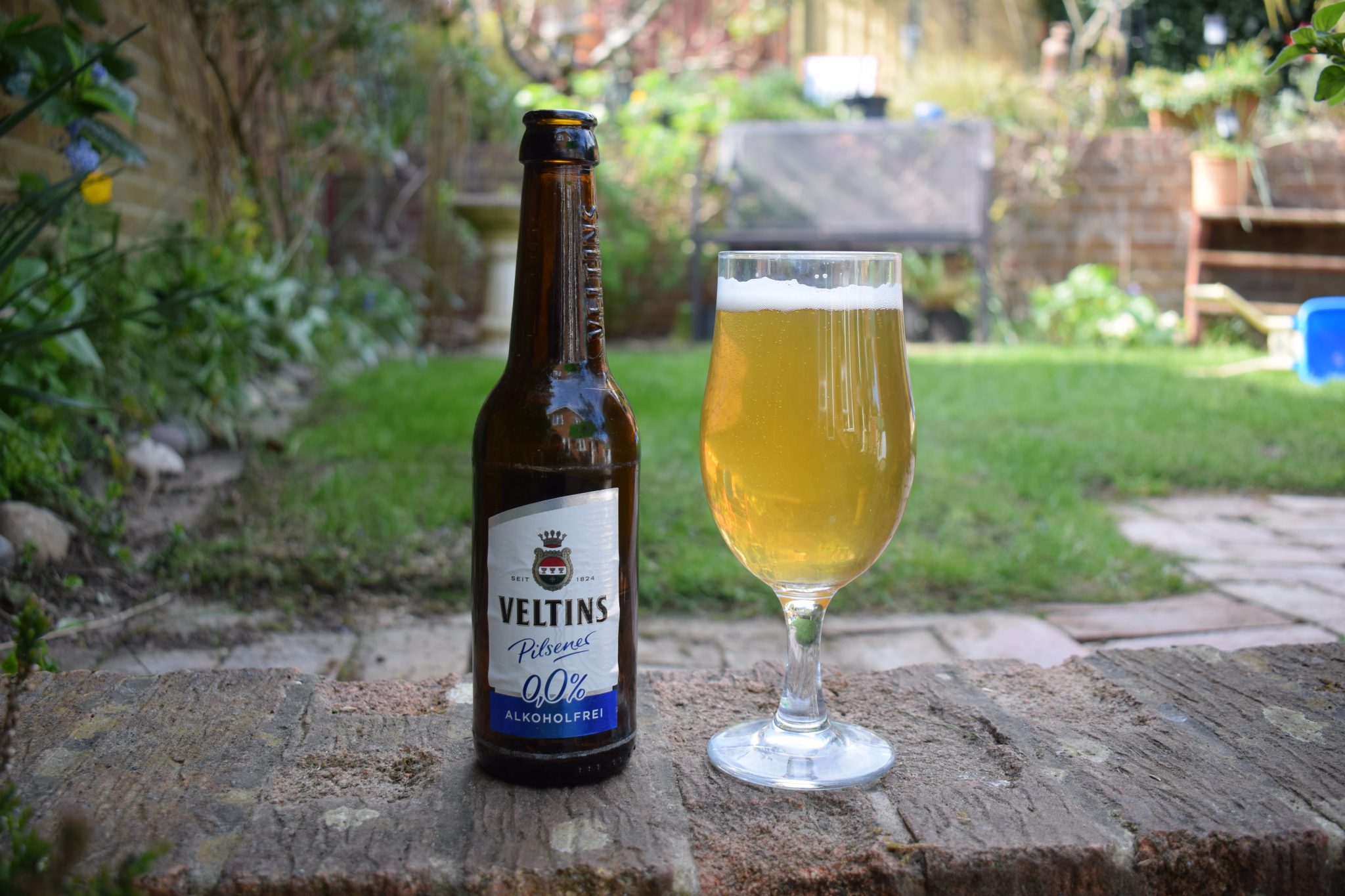