“A Ship Full of IPA” is Brutal Brewing’s 0% version of its full-strength namesake India pale ale. Get tasting notes and info on stockists, calories, ingredients, carbs and sugar.

One of the factors key to the emergence of craft beer – at least in its early days – was that brewers had a free rein.

Unlike big breweries, who often had shareholders or investors to answer to and balance sheets to, er, balance, they could experiment with small batches, using new techniques, recipes and ingredients to create amazing beers.

Later, in a bid to replicate the craft brewery model, many big breweries set up their own experimental microbreweries.

Unless you count selling dull, fizzy, overly hopped beer in funkily labelled 330ml bottles as a success, most of these experiments were unsuccessful.

One large brewing corp that did find success with an experimental craft brewery was Sweden’s Spendrups brewery. Founded in 1897, it set up its Brutal Brewing “brewery workshop” in 2011. Run by brewery and office employees, the experimental brewery is responsible for the Pistonhead range of lagers, which includes a decent non-alcoholic lager.

Brutal Brewing also produces a few craft-style ales. This includes an India Pale Ale called “A Ship Full of IPA” and a non-alcoholic version of the same beer, launched in the UK in March 2019.

This is the same as the full-strength beer, claim the brewery. It just goes through some extra steps, namely vacuum distillation to boil off the alcohol at lower temperatures followed by a dry hopping session to add in some of more hop aroma.

This means the alcohol-free version of A Ship Full of IPA share that same ingredients as the full-strength beer.

There are no grains like wheat or oats in this – just barley malts, including pilsner and crystal malt. The hops are American Cascade and Amarillo and Australian Galaxy.

A Ship Full of IPA Alcohol-Free pours a classic tawny colour with a modest head. The foam reduces to a few streaks once the beer settles and you take a few sips.

The hops dominate the aroma with grapefruit and lychee backed by lemon, which comes through more and more as you drink. There’s a little maltiness to add a nice balance to the aroma, plus some burnt orange coming through as it warms.

The body is fairly decent and there’s an aggressive yet smooth carbonation that gives it a nice fizz.

A pleasant malty mustiness flits in and out of the flavour but there’s only a tinge of fruitiness from the hops or yeast. A stern bitterness hits your tastebuds early on and lingers after each sip.

The taste isn’t as perse as the aroma, but it would still make a fine traditional-style bitter without those tropical hops.

I enjoyed this beer, but I reckon the bitterness, which isn’t backed up my much sweet fruitiness, might be too much for anyone who doesn’t like their high IBUs.

I couldn’t fault the aroma or body though. A decent effort for a totally alcohol-free beer.

"A Ship Full of IPA" by Brutal Brewing 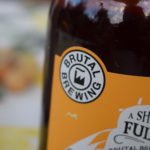