“Mindful” is an aromatic, full-bodied low-alcohol (0.5%) IPA from the Cipher brewery. In this review, get tasting notes, find out where to buy it, how see it’s made and what ingredients it contains.

Whether it’s feeling down after a few drinks or the occasional pang of anxiety following a heavy night out, it’s easy for alcohol to impact our mental health.

Someone who knows has experienced this is Khaled Abdulgani, founder of Cipher, a cuckoo brewery based in Yorkshire, UK.

A veteran of the beer and hospitality industry, Khaled was struggling with depression and anxiety when he used alcohol-free beer to cut down on his alcohol intake.

Soon, he combined his experience in the industry and interest in low and no alcohol beers to set up Cipher, which brews out of the Hambleton Ales brewery in Ripon, North Yorkshire.

Rather than removing the alcohol after fermentation or halting fermentation early, Mindful’s recipe uses less base malts so there’s less sugar for the yeast to turn to alcohol during fermentation. The result is a beer with very low alcohol (0.5%). So it doesn’t need any further processing to make it “alcohol-free”.

For aroma and bitterness, there’s five American hops in this beer – Amarillo, Cascade, Centennial, Mosaic and Simcoe – with some dry hopping (hops added after fermentation) to add extra aroma and flavour.

There’s also lactose (milk sugar) in the recipe to add more body to the beer. So it’s not vegan-friendly. The bottle reassuringly features the batch number, adding to its craft credentials.

It pours a clear bronze with a lively head that soon fizzes out to a slither than floats on the surface and hugs the edges of the glass.

The aroma is complex and pleasant but not overpowering like some dry-hopped beers. There’s a floral foundation with a smattering of mango, grapefruit and caramelised orange.

It’s lively out of the bottle – don’t open it over your favourite tablecloth – but has only a tickle of carbonation with tight bubbles. The body is low to medium, so you might be able to tell it’s alcohol-free. It’s far from watery though.

The taste is understated and finely balanced. Led by grapefruit, mango and smooth citrus flavours and aided by the aroma, it’s fruity with only a touch of maltiness mid sip. But it’s not overly sweet, which means it only needs a touch of bitterness.

The bitterness grows the more you drink, so there’s no danger of downing it before you’ve had chance to savour the flavours.

Mindful is a fine beer with a varied aroma and a refreshing, complex flavour.

The lack of body might expose it as an alcohol-free beer but who cares when it tastes good? 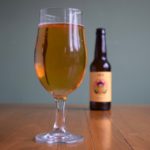