This is a “hybrid” kolsch-style beer from the German Fruh brewery. Get tasting notes and info on stockists, calories, carbs and ingredients in this review.

One of the ways traditional brewers responded to this trend was by creating the “Golden Ale” style. This is a lighter ale, designed to appeal to lager drinkers.

But this wasn’t the first time lager threatened more established ales. For that, we need to go all the way back to 17th and 18th century Cologne in Germany.

At this time, lager – a beer made with yeast that ferments at the bottom of the fermentation vessel – was beginning to threaten the existence of brewers of traditional ales. These use “top-fermenting” yeasts.

First, the local government banned the sale of lagers within the city walls. But it wasn’t long until brewers tweaked their processes to create a hybrid beer. To do this, they used top-fermenting yeast as usual but then stored (lagered) their beers in cold cellars to condition them.

The resulting style eventually became known as Kolsch. Nowadays, it can only be produced within 30 miles of Cologne.

The Cölner Hofbräu Früh brewer – more commonly known as simply Fruh – is a Kolsch producer based in Cologne. Founded in 1905, the company did well to survive the Second World War when the brewery was destroyed by bombing.

Fruh started offering Kolsch in bottles in the late 60s – around the time that imports of lager were eating into ale’s share of the market in places like the UK.

“Fruh 0.0” is the non-alcoholic version of the brewery’s flagship beer. It launched in the 2010s alongside two non-alcoholic radlers.

Fruh 0.0 is brewed to the German Reinheitsgebot (purity law) with water, barley malt and hops only.

It’s not labelled as vegan friendly or gluten reduced.

There are 3.1g of carbohydrates per 100ml. But there’s no info on the labelling about sugar levels.

Fruh 0.0 pours clear amber. It generates a decent head that leaves a ring of foam and an island of bubbles. It looks enticing.

The aroma is grainier than a pilsner yet still pretty clean and subtle.

The hops add a floral, spicy character but not fruitiness.

The body is medium and thicker than an average lager. The bubbles are small and quite prickly.

The flavour on tasting does include some non-specific fruit flavours but it’s the simple, smooth malts that dominate yet again offering lightly roasted barley and cereal.

There’s a slightly sour backbone and little bit of sulphur, which complements the lighter flavours.

The bitterness is light. There’s a sweet and slightly dry finish.

Fruh 0.0 is my first experience of a Kolsch and I’m impressed.

It’s an alternative to lager if you’re after something lighter than ale. And features an interesting and simple mix of flavours. 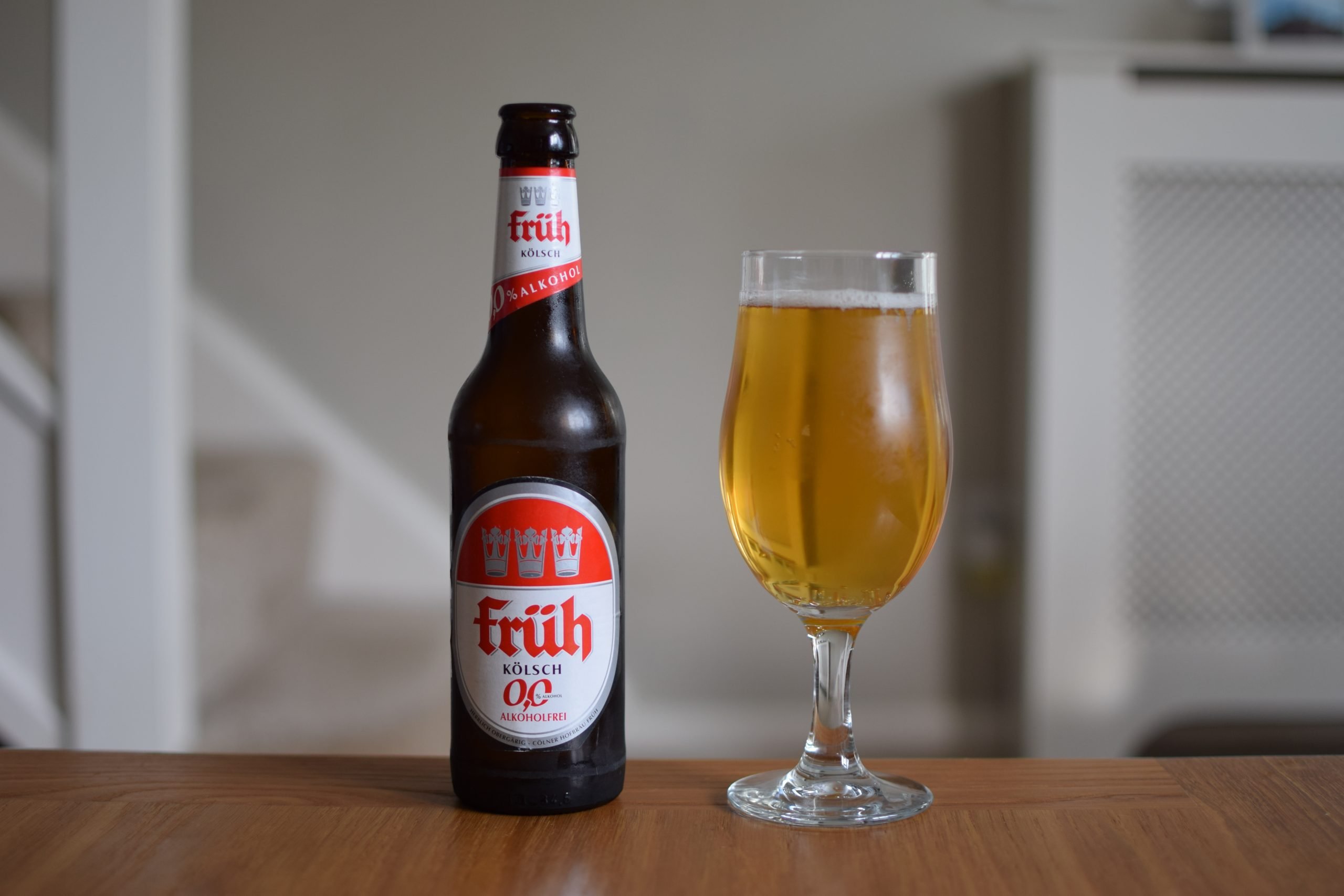