Infinite Session “IPA” is an earthy and floral low-alcohol (0.5%) India pale ale. Get tasting notes and nutritional info in this review.

What’s the difference between a pale ale and an IPA?

Ask 10 people and you’ll probably get 10 different answers. And while traditional IPAs were high in alcohol and hoppy so they didn’t spoil on the 11,000 miles journey from England to India (we’re talking 200 years ago here), modern IPAs are harder to define. Sometimes it simply comes down to what side of the Atlantic it’s from or what the brewery decides to call it.

Infinite Session’s IPA certainly isn’t an IPA in the traditional sense with regards to its ABV. As a specialist alcohol-free brewery, its IPA comes in at 0.5%, the same as its “Pale” pale ale.

So what’s the difference between Infinite Session’s IPA and pale ale?

Both have six grains in the malt bill, including wheat and oats. The main difference is the variety of hops used. The IPA uses Amarillo, Cascade and Simcoe hops, while the pale ale features Ekuanot, Citra, Mosaic, Chinook and Galena.

IPA is a little lively out of the can, so be careful when you open it. It’s golden in colour, with a mid-sized head that holds its own once the initial fizz dies down.

The initial aroma is earthy and floral. Then there’s more of a perfumy, soapy scent. As expected with the hops used here, there’s no fruitiness.

The mouthfeel is smooth and soft and it isn’t as gassy as threatened by the bubbles on cracking open the can. The body is a little thinner than a proper-strength beer but it’s not overly watery.

The bitterness in the flavour sneaks in quite late but then hangs around a while in the aftertaste. Otherwise, it’s the malt that dominates a clean taste that has a twinge of lemon peel in with it too.

I didn’t find Infinite Session’s “IPA” as complex and interesting as its “pale”. It’s a little thinner and I wasn’t as keen on the aroma.

But it’s still a better option that many of the alcohol-free beers on the market and not overly bitter like some other non-alcoholic IPAs. 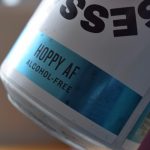