Innis and None is a 0% pale ale from Scotland’s Innis and Gunn brewery. Get tasting notes, plus info on stockists, calories and more in this review.

I like beer and I like whisky – just not at the same time. Hence why I’ve never been a fan of Scottish brewer Innis and Gunn, which ages many of its beers in bourbon barrels.

One beer that you won’t find maturing in the Innis and Gunn barrel store is its new non-alcoholic offering, “Innis and None” (see what they did there?).

The brewers don’t even ferment this pale ale. This means they don’t have to remove any alcohol to bring it down to 0% ABV, thus keeping the flavour intact.

Innis and None uses six types of hops, so it promises lots of bitterness and aroma. It also has added ginseng and guarana (both types of plants) and vitamin C (listed as ascorbic acid on the ingredients, if you’re checking).

These extra ingredients are presumably there to boost the beer’s healthy credentials. However, I’d like to know exactly how much ginseng and guarana is in this beer.

After all, guarana is a stimulant that contains caffeine in unprocessed form. Does this mean there’s caffeine in this beer? It’s not mentioned on the can.

Also, while there’s limited evidence that ginseng can help boost your immune system, research suggests it may be unsuitable for pregnant women – an issue if you’re considering this beer as a non-alcoholic option when you’re expecting.

Anyway, let’s put the science to one side and see if this beer’s any good.

It pours an orange-gold colour with a fluffy head. It looks delicious.

Unfortunately, the smell, which is overly skunky isn’t as impressive – it’s like sticking your head in a bag of hops and way too overpowering. There’s a touch of malt and bread in the aroma, jostling for attention with the hops.

The mouthfeel is better. It’s quite thick, almost sticky. This invites you to sip rather than chug down like a soft drink.

Flavour-wise, the hops feature heavily with an initial pine and grass hit on the tastebuds. The taste then gets a little maltier but it find its hard to break through the hops.

There’s hardly any bitterness and only a little sweetness, that comes through near the end.

It’s definitely not a bland beer. There’s just too many strong flavours competing for space. I found it sickly after a few gulps.

I’m not sold on this alcohol-free offering from Innis and Gunn. It promises so much, yet fails to deliver.

The lack of information about the added ginseng and guarana also worries me – a bit more info on the label about these ingredients wouldn’t go amiss.

Key info – Innis and None 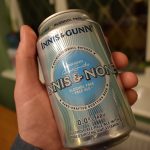