“King Limbo” is an ultra-low-alcohol (0.5%) fruity IPA from West Sussex’s Laine Brew Co. Get tasting notes, plus info on stockists, calories, carbs, sugar and ingredients in this review.

One of the most common arguments against alcohol-free beer I see from so-called beer lovers is that it only benefits large breweries because of the costs of production.

True, producing a low or no alcohol beer often requires specialist equipment or know-how – sometimes both.

But it hasn’t stopped small and mid-size operations like Kehrwieder, Tempest, Thornbridge and Vandestreek brewing a non-alcoholic beer alongside their core full-strength beers. Even home brewers are starting to give it a go.

Laine Brewing is another smaller brewery that’s had a crack at an alcohol-free beer. Not that Laine hasn’t got the backing and resources – founded in 1996 as a single pub, the company is owned by the investment company Patron, which also owns the Punch Taverns pub group. Now the group runs more than 50 pubs.

The brewery arm of the business is more recent with the first beers leaving the conditioning tanks in 2016. It brews out of its main site near Horsham, West Sussex and also has breweries at three of its pubs.

Anyway, Laine’s alcohol-free (0.5%) “King Limbo” beer is in the style of an IPA. Made with wheat, rye, oats in the grain bill alongside malted barley, it’s hopped with Citra, Summit, Columbus and Mosaic hops so promises a fruity punch.

King Limbo pours a luscious tawny colour, with lots of caramel-coloured foam and a decent head that drops off its bubbles down the side of the glass as you sip.

The aroma isn’t as intense as promised by the hop varieties but has a nice balance of sweet passion fruit and a touch of smoky malts. It’s also a teensy bit metallic.

The body is thin with a dry, tacky mouthfeel. It’s well carbonated with smooth bubbles that don’t make too much of a commotion as they slip down.

The flavour features less fruit than the aroma, with a satisfying caramel maltiness jostling for the limelight. The hops provide a handy shot of bitterness to balance off the sweetness that’s left from the aroma.

The flavours don’t last that long, which makes the end of each sip feel a bit watery when the taste pairs up with the body.

Although it doesn’t quite deliver like some of its competitor IPAs, Laine Brew Co’s King Limbo is a good alternative to most other alcohol-free beers and soft drink options.

I especially liked the mix of smokey malts and tropical fruits in the aroma. 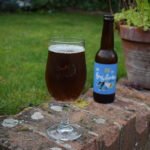