“0PA” is an alcohol-free (0%) pale ale from Yorkshire’s Leeds Brewery. Find out how it tastes and get info on stockists, calories and ingredients in this review.

With dozens of pubs and bars plus a sprinkling of breweries within the city limits, Leeds is one of the UK’s leading craft beer and real ale destinations.

Naturally, Leeds Brewery has a big presence in the city with five pubs dotted throughout. The brewery is a relative veteran in modern times, having been set up in 2007 before the recent boom in new UK breweries.

Leeds Brewery isn’t a specialist alcohol-free brewery like Big Drop and Nirvana. However, like many breweries keen to take advantage of the recent rise in popularity of non-alcoholic beer, its been experimenting with creating an alcohol-free beer. The result is “0PA”, a 0% ABV pale ale.

I ended up drinking in three of Leeds Brewery’s pubs on a weekend trip the city last year. But I was pretty underwhelmed by the beers. Will I feel the same about 0PA?

There’s hardly any aroma from this beer when you crack open the bottle. And judging by my experiences with the overpowering aromas of other 0% ales like St Peter’s “Without” and Innis and Gunn’s “Innis and None“, this is probably a good thing.

However, it doesn’t take long for my nostrils to tease out some aroma – a little tropical fruit laced with caramel malt and a hint of savoury wortiness, which seems to be a feature of lots of 0% beers.

In the glass, it looks superb pouring a deep copper with a decent head that clings to the side of the glass as you sip. Despite the foam, it’s not overly fizzy in your mouth. It’s quite vicious, but a little more syrupy than your average full strength beer.

More of the aroma is released when you start supping. There’s a little wortiness in the flavour, but it’s not sickly like with many other non-alcoholic beers. The main flavour is caramel, which pairs nicely with a bitterness that stops you gulping it down too quickly. 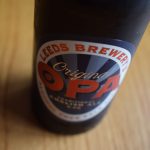