“Blond 0.0” is the non-alcoholic (0%) version of Leffe’s famous blond ale. In this review, get tasting notes and info on stockists, calories, carbs and sugar.

One of the biggest mistakes many drinkers make when sampling non-alcoholic beer is comparing it to their favourite full-strength beer.

Sure, there are a handful of non-alcoholic beers out there that rival their alcohol counterparts. But it’s much better to compare NA beer with other non-alcoholic options like soda, coffee, water and so on. And bear in mind for every superb full-strength beer there are dozens of poor ones.

After all, I’d much rather drink an average non-alcoholic beer than a sickly-sweet lime and soda when I’m not drinking alcohol.

These types of comparison are a significant issue for producers that are releasing non-alcoholic versions of full-strength beers, where drinkers are naturally likely to compare the NA version with the original. Produce something that’s not up to scratch, and they risk affecting the reputation of the entire brand.

Global beer behemoth AB-Inbev has tapped into the thirst for low and no alcohol by launching non-alcoholic versions of many of its beers, including Stella Artois, Budweiser and Jupiler. These have joined Beck’s Blue, the original mass-market NA beer, with mixed results.

Another recent addition to AB-Inbev’s non-alcoholic portfolio is Leffe “Blond 0.0”, an alcohol-free version of its well-regarded beer of the same name.

The Leffe brand image relies heavily on its history as an abbey brewery, founded in 1240.

The abbey and brewery were forced to close during the French Revolution in the late 18th century. And it wasn’t until the 1950s that Leffe beer made a comeback, this time as a commercial undertaking with beer based on the abbey recipe.

Alongside the typical ingredients of water, barley malt and hops, Leffe Blond 0.0 also include maize, sugar and vague “natural flavours”.

As a Belgian blond, the malts are likely to be of the Pilsner variety with spicy, earthy hops varieties such as Saaz or Hallertau.

The packaging doesn’t say it’s suitable for vegans or that it’s gluten free.

This beer pours a clear amber. There are a few bubbles that scare up a slight head. But it soon disappears, leaving it looking a little flat.

The aroma features many variations, some good and some not so good.

A sweetcorny pale malt base supports bubblegum, honey, clove, banana and a touch of ammonia. I didn’t pick up any of the vanilla promised on the packaging.

The body is thin with a syrupy texture. The carbonation is light.

On tasting, sweet pale malts again support some of the same flavours from the aroma, with clove and bubblegum being joined by orange and a floral character.

The sweetness lasts throughout each sip, turning a little sickly as it merges into the aftertaste.

This beer also offers substantial bitterness, that mooches without complementing the other flavours and sensations.

Again, I detected none of the promised vanilla flavour.

While many of the flavours present in Leffe Blond 0.0 would be fine on their own, their amalgamation leads to an unstructured clump that I found a little too sickly.

Maybe that explains the smaller 250ml serving… anyway, this isn’t a beer I’m going to be revisiting. 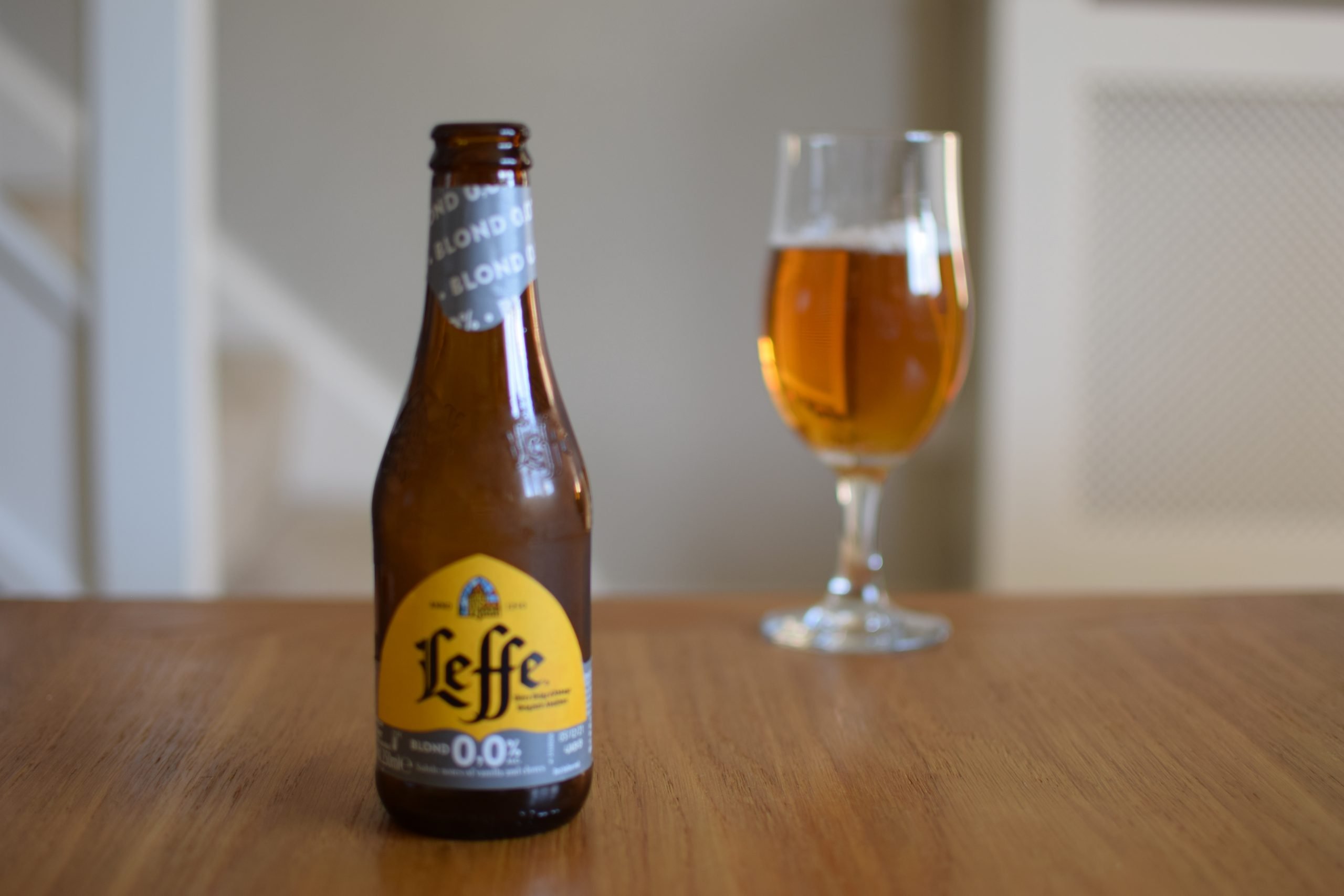