“DIPA Toe In” is a low-alcohol double India pale ale from Lowtide Brewing Co. In this review, get tasting notes and info on stockists, calories, carbs and sugar.

It wasn’t so long ago that lagers and imported German wheat beers were the seemingly the only styles of non-alcoholic beer you could pick up.

Then, as the market grew and brewing techniques, along came pale ales, stouts and sours.

Now, brewers of non-alcoholic beer are experimenting with even more sub-styles, some of which didn’t even exist 20 or 30 years ago as alcoholic beers never mind NA ones.

Lowtide Brewing Co have done this with their amusingly titled “DIPA Toe In” – a DIPA (or double India pale ale).

Lowtide started life as “Crafty AF”, an online NA beer store. The team behind it have now moved into brewing non-alcoholic beer rather than selling it. DIPA Toe In was the brewery’s first beer, but it now also sells a few other styles.

In the full-strength world, many would argue that an IPA is meant to have a higher ABV than a standard pale ale or bitter, with traditional examples coming in around 6% (probably to help them survive the long sea journey to India if legend is to be believed).

Double IPAs are so-called because they’re a stronger version of an IPA. But the ‘double’ description is a little misleading here – they usually come in around the 7.5%–10% ABV mark (I suppose “1.5 X IPA” didn’t have much of a ring to it).

So how is it possible to brew a 0.5% ABV DIPA, as Lowtide have done?

Well, DIPAs have a few other typical non-alcohol characteristics according to the style guidelines, namely intense hop aromas from modern hops and a clean malty sweetness.

The hops in DIPA Toe In are all modern varieties – Idaho 7 (released in 2015), Mozart (released 2019) and Moutere (released 2015) while the grains are Pilsner malt, Carapils malt, wheat, rye and oats.

It’s not gluten free but is suitable for vegans.

DIPA Toe In is low in calories, carbs and sugar.

DIPA Toe in pours a murky, bronzed-brown colour. Pour carefully, because there’s loads of foam. This leaves a substantial caramel-coloured head that takes a while to settle.

The aroma fades quickly after pouring, making it hard to pick out the prominent flavours.

There’s a low-key and clean malt base, with a slight liquorice character. Soon, the aromas from the hops join the malt – blackberry, grapefruit, passionfruit, resin, pine and stoned fruit.

There’s a little sulphur in the aroma too.

The mouthfeel is luxuriously soft and creamy with gentle carbonation and a heaving body.

Pale malts provide a grainy, liquoricey foundation to the taste, and there’s more fruity flavours with roasted orange entering the fray alongside a pinch blackcurrant. This is joined by an earthy character, possibly caused by the resin and pine flavours combining with the malt.

Bitterness is high and in danger of overpowering the other flavours before it dies off to leave a balanced, dry finish.

Achieving a DIPA with no alcohol feels like an impossibility but this is a good effort from Lowtide Brewing, even if the malt flavours are more pronounced than I’d expect in a DIPA.

The creamy mouthfeel is especially noteworthy.

Unfiltered, it’s probably one to avoid if you like your beers crystal clear though. 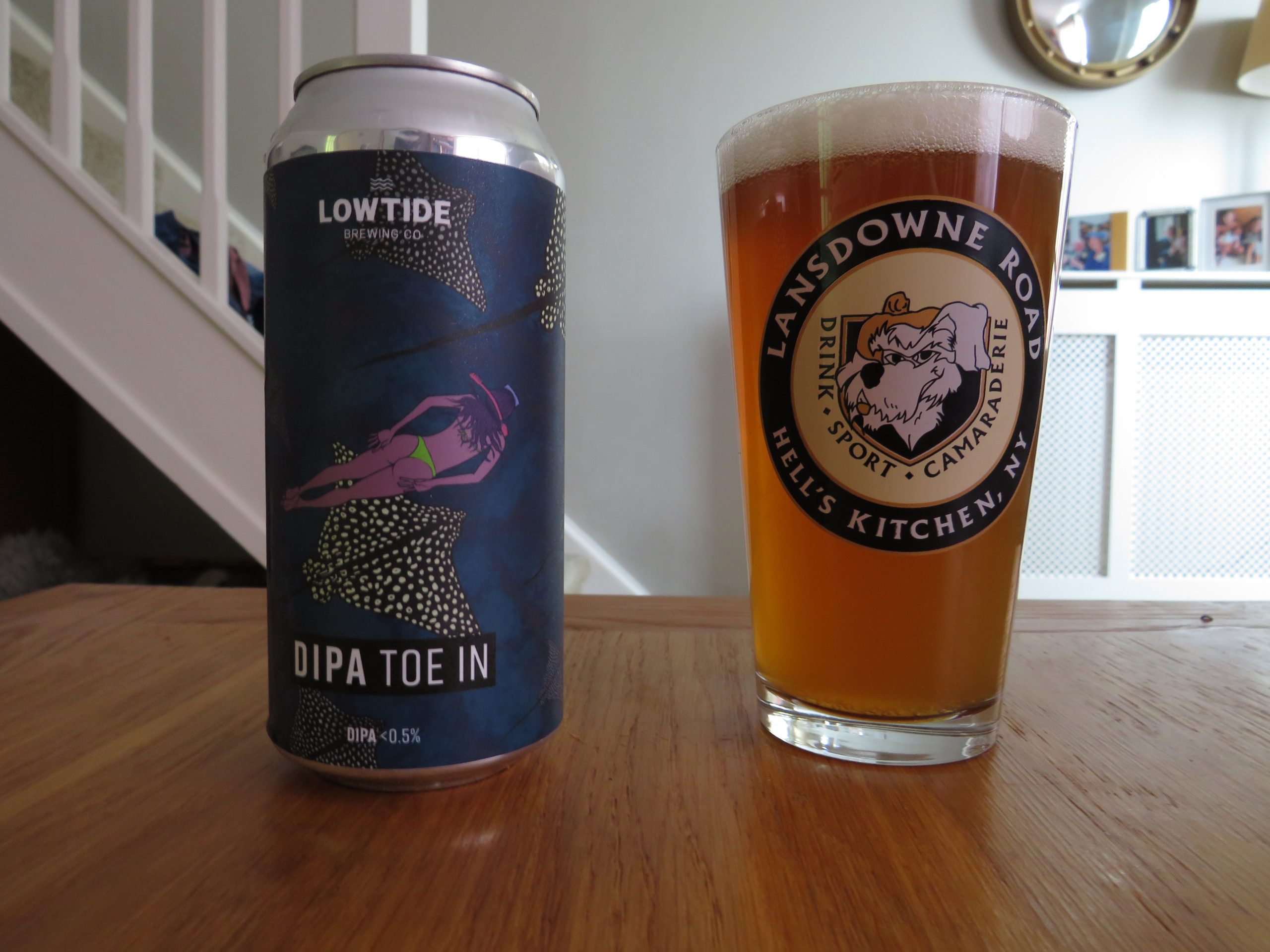