Mantra is an organic and vegan low-alcohol (0.5%) pale ale from the Nirvana Beer Co brewery. Get tasting notes and find out more about its ingredients in this review.

Compared to many non-alcoholic alternatives, alcohol-free beer made with water, malt, hops and yeast is a pretty natural drink.

After all, beer is one of the oldest drinks in the world. And while many brewers use modern techniques and equipment, for the most part they use the same basic ingredients and methods as 1000 years ago.

One thing that has changed over the years is how the ingredients are produced. Not only do most modern brewers treat their water before brewing, but many suppliers have industrialised how they produce hops and grain.

This has created an opportunity for breweries that use organic ingredients. This generally means growers avoid the use of manufactured fertilisers and pesticides and uses sustainable farming and production methods that help protect wildlife and human health.

Specialist low and no alcohol brewery Nirvana Beer Co produces one of a handful of organic alcohol-free beers available. Named “Mantra”, it comes in at 0.5% ABV.

Mantra’s ingredients – which include English-only hops rather than the smattering of US hops favoured by many craft producers – are certified by the Soil Association, the UK’s largest organic certification body. Its ingredients and methods also make this beer suitable for vegans.

Mantra pours gold-orange. It’s lively when you crack it open but soon settles in the glass, leaving little foam on top. This all makes it looks more like a still cider than a beer when it settles down.

The aroma is impressive for a beer with no new world hops. Initially malty, grassy and medicinal, it gets fruitier as you get used to it with some tart lemon and a chunk or two of mango.

The mouthfeel is decent too. Despite the lack of foam, there’s a nice tickle of carbonation to go along with the light to medium body. The finish is dry and slightly tacky, encouraging further sips.

The flavour is more neutral than the aroma. It’s slightly more medicinal with overtones of root beer flavours backed by the taste of caramalt and a touch of lemon, which adds some bitterness.

Mantra didn’t blow me away, but it’s still an interesting non-alcoholic option. I loved the varied aroma and the lack of bitterness makes it an easy drinker for those who don’t usually drink beer.

A little more foam and lacing would have made this beer easier on the eyes, as the head soon dies. Overall though, I’d seek it out again especially if I’m ever in the market for organic products. 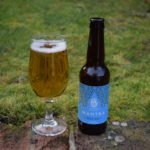