“Holy Faith” from Leeds’ Northern Monk brewery is a 0.5% hazy pale ale. Get tasting notes and info on stockists, carbs, calories, sugar and calories in this review.

Northern Monk is the only brewery that produces non-alcoholic beer I’ve managed to visit.

This was on a trip to Leeds in 2017, which mostly revolved around pubs and beer – and a little culture.

These were the days before I’d discovered the joys and convenience of non-alcoholic beer.

One abiding memory of my stop at the Old Flax Store bar, situated above the brewery, was my surprise at enjoying a 3% ABV (alcohol by volume) beer. Back then, I was yet to find any good beers under 3.6%.

Despite its status as a Yorkshire institution, Northern Monk started up as recently as 2013.

The brewery focuses mainly on full-strength brews, producing hundreds of different beers over the years.

It delved into the non-alcoholic beer space with a limited run of a beer called “Super Stredge” (0.5%), which was an ultra-low-alcohol version of its 2.8% IPA, “Striding Edge”.

This “Holy Faith” (0.5%) beer is described on the brewery website as a limited edition beer, but it’s now available in major supermarkets as well as independents. So my guess is that it will be around for a while.

Holy Faith is in the style of a hazy pale ale, based on the brewery’s 5.4% “Faith” beer.

With a low original gravity, it’s likely this beer is brewed to be ultra low in alcohol from the off, rather than having the alcohol removed after fermentation.

The ingredients feature oats and maltodextrin alongside barley malt, hops and yeast.

The hops in this one are El Dorado and Citra Cyro. (Cyro hops are hops in pellet form that have been processed and packaged to include more of the bits that create desirable aromas and flavours.)

Holy Faith is suitable for vegans but isn’t gluten reduced.

Disappointingly, there’s no info on the packaging about the calorie, carbohydrate or sugar content of Holy Faith.

So it’s worth bearing in mind that NA pale ales sometimes have a tendency to be high in sugar.

Holy Faith pours the shade of pineapple juice. It’s opaque and generates a ring of bubbles rather than a substantial head.

There are few signs of life once the initial pour calms.

Those hops feature heavily in the aroma with only the slightest hint of lightly roasted barley making way for floral orange and lemon plus pineapple, grapefruit, oak and pine.

The mouthfeel has an odd quality. It’s filmy and a little thin. And while it’s not flat, it’s very lightly carbonated.

Hops are the big feature in the flavours on tasting too. Again, the lightest of light malts provides a base. Again, it’s floral and woody hop qualities (think perfume and pine) that provide the main flavours.

The bitterness is high and lingers into the next sip.

Holy Faith is a pretty average NA beer, which makes it one of the better choices in the supermarket.

There are some OK flavours in the aroma and taste. But it’s bit one dimensional with the hops providing too much of the flavour. 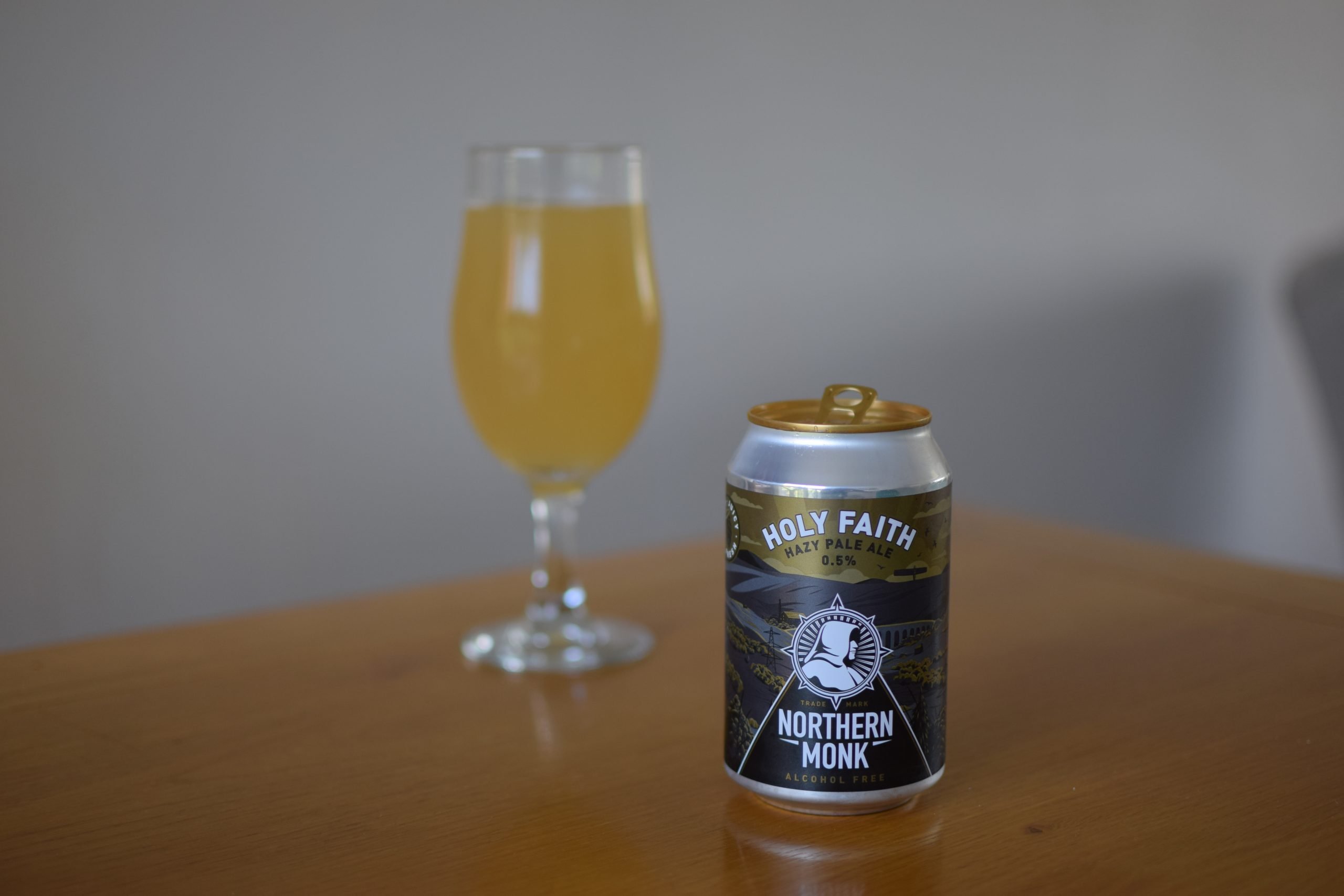