Uiltje Brewing Co’s “Superb-Owl” is an ultra-low-alcohol (0.3%) India pale ale. Get tasting notes plus info on ingredients, calories, carbs, sugar and stockists in this review.

I do love a good pun.

But it took me a few seconds to work this one out. Superb owl?

Why the owl and what’s the connection with football?

The football? I have no idea. The owl? It’s the symbol/mascot that represents the brewery, Netherlands-based Uiltje.

The brewery began life as Het Uiltje in 2012. Without its own premises and brewing equipment in the beginning, it wasn’t until 2016 that it built its own brewery.

Nowadays, it’s still styled as a craft brewer but works closely with Swinkels, a beer corporation that owns brands including Bavaria and Palm.

The owl-based artwork on its packaging is designed by Gerben Valkema, winner of the Stripschapprijs strip cartoon award in 2021.

Superb-Owl is the brewery’s only alcohol-free beer. The rest of its range consists of full-strength IPAs, pale ales, weizens, porters, stouts and the like.

Uiltje brews its full-strength range on the premises but produces Superb-Owl with an external partner.

Uiltje have made this one with traditional ingredients – water, barley, yeast and hops.

There aren’t even any oats or wheat.

Superb-Owl isn’t gluten free. Despite the standard ingredients, it may not be suitable for vegans.

Like many alcohol-free beers in the IPA-style, there’s a fair amount of sugar in this – 3g per 100ml. That’s out of a total of 5.9g of carbohydrates per 100ml.

Superb-Owl is the colour of straw with a very slight haze.

The carbonation generates a bouncy head, which eases into a fluffy ring of bubbles.

The grapefruit aroma has all the telltale signs of a low-alcohol yeast. It grows with each sniff.

Despite the array of aromas, it does lack depth.

The body is good. The carbonation is tight but light. That said, the bubbles have an aggressive character.

Juicy citrus flavours lead the flavours on tasting. There’s also a little more malt in the taste versus the aroma.

Specifically, the citrus is roasted orange melded with sticky grapefruit. But again, it lacks depth.

The level of bitterness is satisfying, growing with each sip.

Superb-Owl is a solid IPA, with some interesting and well-balanced flavours.

Yet, both the aroma and taste run out of steam. 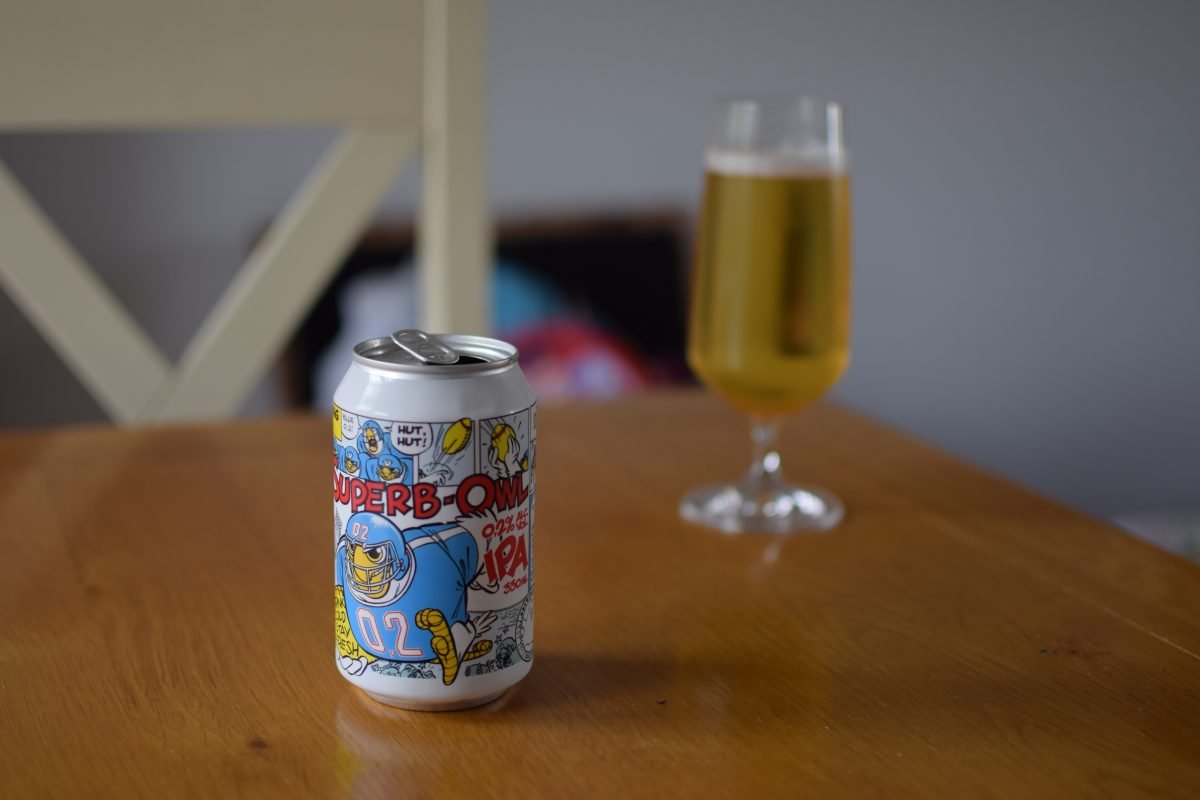