And Union “Der Graf Von Bayern” review is a low-alcohol (0.4%) wheat beer from Germany. Get tasting notes and info on stockists, ingredients and calories, this this review.

It’s no secret that many alcohol-free brewers don’t have a permanent home.

For example, Infinite Session brew from Sambrook’s Brewery in Battersea and Mikkeller, which is almost as well-known for its prolific range of non-alcoholic beers as it is for its standard strength brews, buddies up with Belgium’s De Proefbrouwerij in lieu of having its own brewery.

Contract brewing – or to put it more romantically, gypsy/cuckoo brewing – isn’t new in the beer world. And it’s not just smaller producers with limited resources that partake – global beer brands do it too.

And Union is a gypsy brewery that certainly doesn’t keep its status a secret, because the clue’s in the name. Initially working with breweries in Belgium when it launched in 2007, And Union currently partners with four Bavarian breweries to produce six core beers, all in a modern “craft” style.

One of these is that old staple of many Bavarian breweries, an alcohol-free wheat beer called “Der Graf Von Bayern”, which comes in at 0.4% ABV and has the alcohol removed after fermentation.

Der Graf Von Bayern is unfiltered, so it pours a murky orange colour, which reminded me of juicy New England IPA. Of course, it’s a wheat beer, so the big head that followed wasn’t surprising. Yet, it didn’t last too long and ended with a slither of white bubbles after I gave it a few moments to settle.

The aroma was weak, with a straw-like smell from the wheat backed by a hint of wet cardboard. There wasn’t any spiciness of fruitiness, although this has been lacking in quite a few of the alcohol-free wheat beers I’ve sampled.

The body was surprisingly thin for an unfiltered wheat-based beer with no creaminess. It was well-carbonated with tiny bubbles that produced a few too many burps for my wife’s liking.

The taste was initially clean and malty, like a pilsner or pale lager, backed by a yeasty tang. So far so good. Then I detected an unpleasant sour vinegar-like taste, which reminded me of a cask ale that has been on sale too long. A bit of that wet cardboard flavour from the aroma also came through.

Like most wheat beers, there’s only a little bitterness. There’s very little sweetness too, making the overall flavour a bit too neutral.

Beers with wheat as an ingredient usually always make at least a semi-decent alcohol-free beer. But I wasn’t too impressed with this one. Not only were some of the flavours unpleasant, but the body was also thin.

And I did check my bottle wasn’t past its sell-by-date. Maybe it was a bad batch. 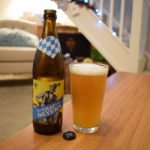