Lager, pale ale, sour, stout. Whatever style of beer you like these, it’s not too tricky to find a non-alcoholic version (in the UK at least).

Yet, it wasn’t that long ago that two styles – lager and wheat beer – were dominating the NA beer scene.

This was probably down to many these beers originating in Germany, which has a long tradition of brewing lagers and wheat beers.

Couple that with the mature market for non-alcoholic beer – where it’s estimated 1 in 7 people drink NA beer regularly – and it’s easy to see why so much alcohol-free lager and wheat beer has hopped across Germany’s borders into the UK and US.

Nowadays of course, with the arrival of specialist low and no breweries and established brewers adding alcohol-free beer to their line ups, there’s more competition for German exports. But this hasn’t stopped German breweries launching their beers abroad.

One of these is Kreuztal-based Krombacher, which launched its non-alcoholic weizen (wheat) beer in the UK earlier this year.

By German standards, Krombacher was a little late to the non-alcoholic game when it launched its Low-Alcohol Pils in 1999. And, unlike competitors such as Maisel and Schneider Weisse, that have always been well-known for their wheat beers, it’s new to that style too, lauching its weizen in 2007.

How is Weizen Alkoholfrei made

“Weizen Alkoholfrei” is the same as the 5.4% full-strength wheat beer, according to the brewery. Brewers remove the alcohol after fermentation.

The hops in this one are the classic Hallertau variety, known for their earthy, spicy and citrusy flavours. There’s also some hop extract and – unusually for a German beer – carbon dioxide on the list of ingredients.

The water is sourced close to the brewery, which means its natural profile probably favours the style without the need for any additional minerals to be added before brewing.

Weizen Alkoholfrei contains 28 calories, 6.1g of carbohydrates and 2.7g of sugar per 100ml – a significant amount when you factor in the 500ml serving.

The bottle features the production date as well as the best before date – a nice touch.

The aroma is slightly sour with straw, pale malt and grass with a sprinkling of lemon. A light spiciness – pepper and clove – hangs around in the background.

The carbonation is quite prickly but it slots in perfectly with a creamy mouthfeel. Unlike most hazy wheat beers, the body is lacking a little.

Musty light malts and tasty cereals lead the flavours on tasting with red apple and ripe banana adding to the flavours to leave a slightly sour aftertaste.

There’s quite a lot of sweetness in this beer, but a good hit of bitterness balances things out after a couple of sips. The bitterness also prevents that sour aftertaste from lasting.

Despite its sweet and sour confusions before the flavours settle, Krombacher Weizen Alkoholfrei is a decent non-alcoholic wheat beer.

I especially enjoyed the aroma, featuring that classic weizen spiciness. 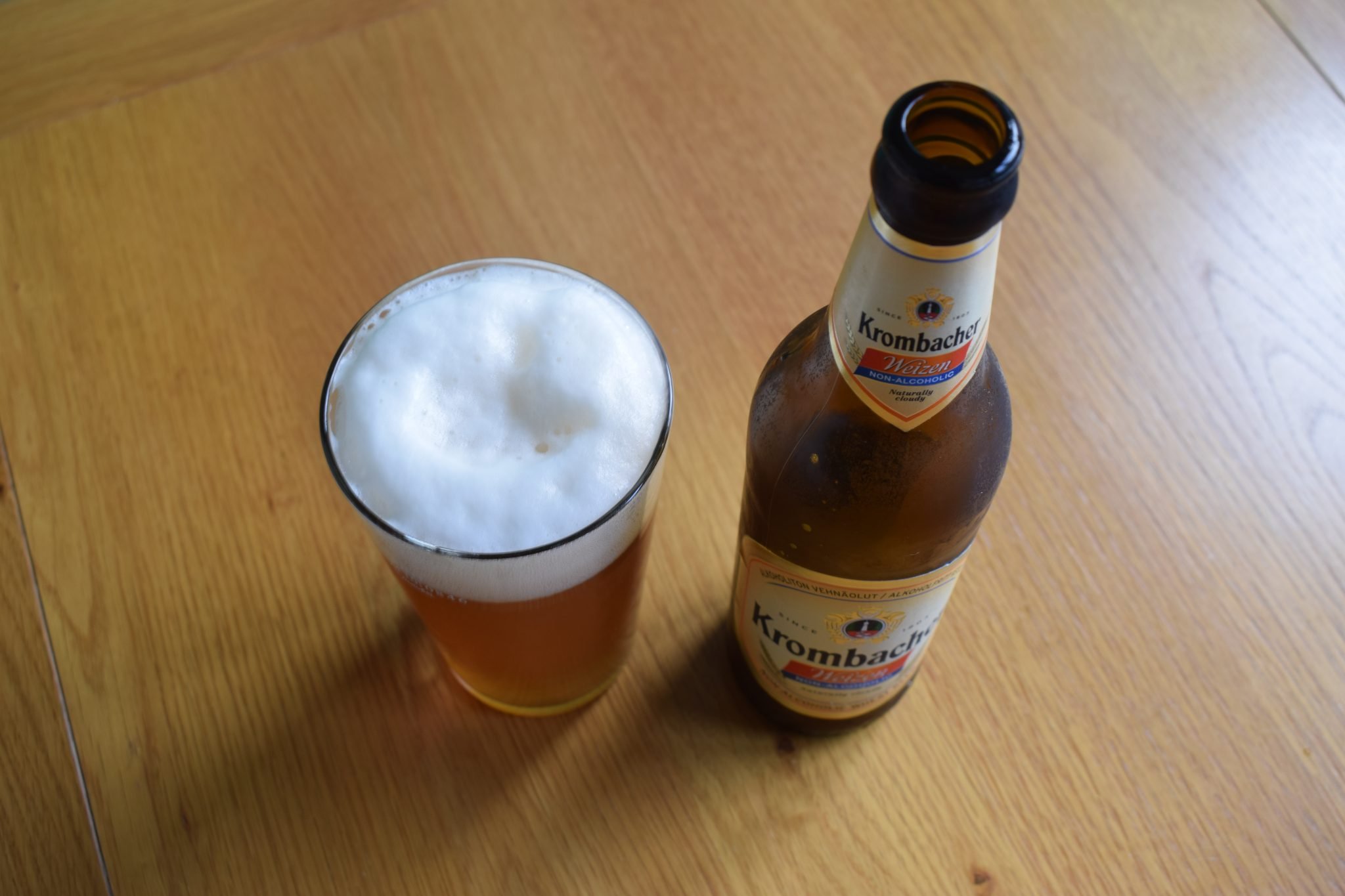