“Patronus” is a dark amber German wheat beer. which is available in Lidl in the UK. Get tasting notes, nutritional info and more in this review.

I make no bones about doing most of my grocery shopping in Lidl, the German “discount” supermarket. Not only do you get to keep the cost of your weekly shop to a minimum, but the lack of choice means you’re in and out quickly. After all, no one wants to spend too long traipsing round the supermarket on a Friday night.

One of the things Lidl is well known for is showcasing the odd German product among the foodstuffs we’re more familiar with in the UK. So, with so many alcohol-free beers coming out of Germany, I’ve been surprised never to see any on the shelves among the bratwurst, bockwurst and frikadellen. Until now that is.

“Patronus” is a wheat beer brewed by “Perlenbacher”, which is presumably a brand name dreamt up for Lidl’s own brand beers. There’s no nod to the original brewery on the label, which is in German on the front and English on the back. The ABV is also missing from the label – the first time I’ve come across a producer choosing to omit this voluntary information (in the UK, beers under 1.2% ABV don’t need the ABV on the label).

The label also highlights that a bottle of this beer has 13.5g of (natural) sugar. This is comparable to quite a few other alcohol-free wheat beers and about the same amount you get in 100ml of fresh orange juice. But it might not be one you’d want to guzzle all evening.

Perlenbacher pours a shadowy amber colour, with a great head, typical of a wheat beer. The aroma is sour, with a cereal-like smell that’s slightly cardboardy.

The mouthfeel is excellent, with tight carbonation, thick body and a creaminess that lingers on the tongue.

The taste isn’t as sweet as promised by the sugar levels highlighted on the label, although there’s a sweet aftertaste. The main flavour is a repeat of the cereal/cardboard theme from the aroma, which isn’t as unpleasant as it sounds but could get sickly if you drink a few of these in one sitting.

There so no signs of the hops in the aroma as expected for a wheat beer. It also lacks hop bitterness.

This isn’t a bad beer for the price, despite that cardboardy taste and aroma. You’re definitely better off reaching for one of these over a cola or big serving of fruit juice.

Following the craft beer boom, Lidl developed its own (admittedly average) range of “craft” beers. Now that alcohol-free beers are getting more popular, maybe we’ll see a few more on the shelves? 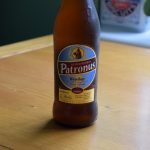