Stiegl “Freibier” is a low-alcohol (0.5%) lager made with wheat. Get tasting notes plus info on stockists, calories, carbs, sugar and ingredients in this review.

I don’t know about you, but beer isn’t the first thing that comes to mind when I think about Austria.

Yet, Austrians love their beer. And I mean really love it – in 2017 the average Austrian downed almost four pints of beer a week.

This might not sound a lot, but it puts them second only to the Czechs in the European beer consumption leagues.

That said, there’s a decent chance that a modest chunk of that beer consumption will include low an no alcohol beer. Like their German neighbours, Austrians are no strangers to beers under 0.5% with non-alcoholic beer accounting for around 4 in every 100 beers sold (in the UK, it’s closer to 1 in every 100).

The brewery itself has been around for yonks. Based in Salzburg, it was founded in the 15th century and in an age of traditional breweries being snapped up by big brewing corps is still in private hands.

Stiegl grows and malts its own grain and usually sources its hops from Austria, although “Freibier” uses Saphir hops grown in Germany. This new type of hop is common in European pilsners and wheat beers, and is similar to (and related to) the more traditional Hallertau hop variety.

The recipe for Freibier also uses wheat malt, which is unusual for a lager. And additional carbon dioxide, which isn’t allowed as an ingredient across the border in Bavaria under the Reinheitsgebot unless it’s captured as part of the brewing process.

There’s about 86 calories in a 330ml bottle of Stiegl Freibier with 18.5g of carbs and 10g of sugar. All a bit higher than average for an AF lager.

Freibier is amber in colour and slightly cloudy because it’s unfiltered (the label warns of possible sediment but I had no issues).

A foaming head reduces to a slither once it settles down leaving a few islands of bubbles on the surface as you sip.

There’s a little pale malt in the aroma, joined by a wheat, straw and wet cardboard with a sage-like herbiness. The malts get more worty as it warms up but it’s far from an unfermented smell.

Freibier has a competitive medium-bodied mouthfeel. It’s well carbonated with smooth bubbles. Because it’s unfiltered, there’s a gentle texture to it.

The flavour is sweet getting towards sour, which is apparently a feature of many of Stiegl’s beers. The maltiness is a tiny bit papery, held together with a citrusy, lemony foundation.

The sage from the aroma comes through in the flavour with more herbiness as the lager warms.

There’s a whisper of bitterness that comes through in the aftertaste.

Steigl’s Freibier has an excellent body and some interesting if unorthodox aromas and flavours. I especially enjoyed the sagey herbiness, which combined nicely with the citrus flavours.

My only major qualm was the sweetness conjured by the higher-than-average sugar content along and the citrusy flavours.

If you like an easy drinking lager, this will probably hit the spot. If you prefer your lagers with a good hit of bitterness, maybe not. 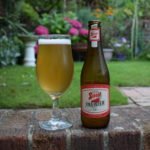