“Old Ale” is the ultra-low-alcohol version of the Harvey’s Brewery of the same name. Get tasting notes and find out about calorie, carb and sugar content plus ingredients and stockists.

If I had to level any criticism at the non-alcoholic beer industry – and I’m scraping the barrel a bit here – it’s that the range of beers available is dominated by lagers, hoppy pale ales, sours and wheat beers.

A bit of a first world problem perhaps?

Yep. But I’d love to see a few more traditional styles get the NA treatment – literally in the cases where producers are brewing a regular beer, then removing the alcohol.

Harvey’s, the 200-odd-years-old brewery based in the Lewes on the edge of the South Down in East Sussex, has quietly launched a couple of beers under 0.5% ABV.

And although the brewery has added a few modern styles to its seasonal and keg ranges, it chose two traditional styles for its foray into non-alcoholic beer with 0.5% versions of its flagship bitter, “Sussex Best” and its core Winter Beer, “Old Ale”.

Harvey’s first brewed the original Old Ale in 1952. This make the recipe older than the brewery’s brand of water, which takes 30 years to filter through the downs until it reaches the well under the brewery.

The cask version of the beer is only available in the autumn and winter, with the latest brew celebrated with Morris dancing every October at the “Dancing in the Old” event.

Traditional enough for you?

The only thing not traditional about Low Alcohol Old Ale is how it’s produced. It’s brewed to the same process and recipe as the alcoholic version, but the brewery removes most of the alcohol before bottling it. This leaves us with a 0.5% beer.

As well as hops and Maris Otter malts, the ingredients also include maize, sugar and caramel colouring, some of which you might not expect in a traditional ale.

There’s 63 calories in each attractive 275ml bottle of low-alcohol Old Ale with 14.3g of carbs and 6.8g sugar.

Low Alcohol Old Ale pours a comforting charred copper colour. It looks flat, with few bubbles. Stick it in a short glass and it could easily be mistaken for an oak-aged rum.

The smell is magical with a deep, fruity red wine tang backed by berry, oak and a touch of roasted malt. It’s easy to see why this is a popular winter beer.

Despite its lethargic appearance, there’s enough carbonation to tingle your tongue. But a touch more liveliness wouldn’t go amiss. The body is full for an alcohol-free beer but there’s a syrupy texture.

The winey, tarty tang is present in the taste too but the roasted malts lead you into these flavours this time. The maltiness tails off a little mid-sip, leaving a taste of sweet raisin along with a touch of oat and oak. With caramel adding a final flourish.

There’s zilch bitterness in the flavours, which lets the sweetness shine through. Yet, those sweet flavours aren’t overwhelming or unbalanced.

Harvey’s Low Alcohol Old Ale is a snuggly, tasty beer that will appease the traditionalists and entertain anyone who likes a bit of variety to their non-alcoholic beer adventures.

I loved the aromas and flavours in this one. It’s just the mouthfeel that lets it down ever so slightly. 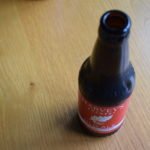