This 0.5% honeycomb and chocolate stout is a collaboration between the Lowtide and C’84 breweries. Get tasting notes and info on ingredients, calories, carbs, sugar and stockists in this review.

Whether it’s hops and tropical fruit, yeast and bubblegum or roasted malt and coffee, the diverse flavours and aromas that brewers can create in beer using four basic ingredients is pretty amazing.

“Who Let the Bees Stout” is a non-alcoholic beer that takes advantage of the multitude of flavours you can create when you combine grain, hops, water and yeast. It’s described by the brewers – Lowtide Brewing Co and C’84 Brew Co – as a honeycomb and chocolate stout.

Lowtide Brewing specialises in ultra-low-alcohol beers under 0.5% and are based in the south west of the UK. Founders Rob and Dave started their journey selling non-alcoholic beer with an online store before switching to production.

Yorkshire-based C’84 has been brewing for more than 30 years. Formerly the Great Yorkshire Brewery, it re-branded in 2020 with a focus on standard-strength beers, although it does have a 0.5% beer of its own, “24 Hour IPA”. It produces the odd mead too, so has previous when it comes to honey drinks.

Not that Who Let the Bees Stout contains honey of course. But it does feature Goldings hops, which can showcase a honey flavour along with floral, spicy and earthy characteristics.

The other hop variety in this is Columbus – known for its liquorice, pepper and sherbet flavours.

The grains are malted barley (black, pale and chocolate), wheat and rye.

There’s also maltodextrin and cacao nibs, which are made from crushed cocoa beans and used to make chocolate.

There’s also no information on the packaging about its nutritional make up, so it might not be suitable for you if you’re closely monitoring your calorie, carbohydrate or sugar intake.

Who Let the Bees Stout pours the colour of black treacle, with a reddish tinge. A fizz creates a few caramel-coloured bubbles that mostly radiate towards the edge of the glass.

The bubbles eventually die, leaving it looking a bit lifeless.

This sounds like it could overwhelm the senses, but each aroma slots in alongside the others.

In the mouth, this beer has low carbonation and a light body. The bubbles are gentle, aiding the beer’s sneak down your throat.

Fruit, chocolate and roasted malts combine again in the taste to produce a smokey, medicinal flavour with a drop of honey always in the background.

As with the aroma, the fruit flavour is blackcurrant, which forms an interesting combo with the malts and chocolate.

The chocolate flavours build in each sip, dropping out of contention suddenly to leave a fruity yet dry finish.

Who Let the Bees Stout won’t satisfy those looking for a non-alcoholic alternative to a classic dry stout.

But if you’re looking for an interesting and varied drink, it’s just the ticket – even if you don’t normally drink dark ales.

The aroma is especially attention grabbing. And although the mouthfeel and taste don’t quite match up to those first sniffs, it’s not a drink you’re going to down without taking any notice of what’s in your glass.

Key info – Lowtide and C’84 Who Let the Bees Stout 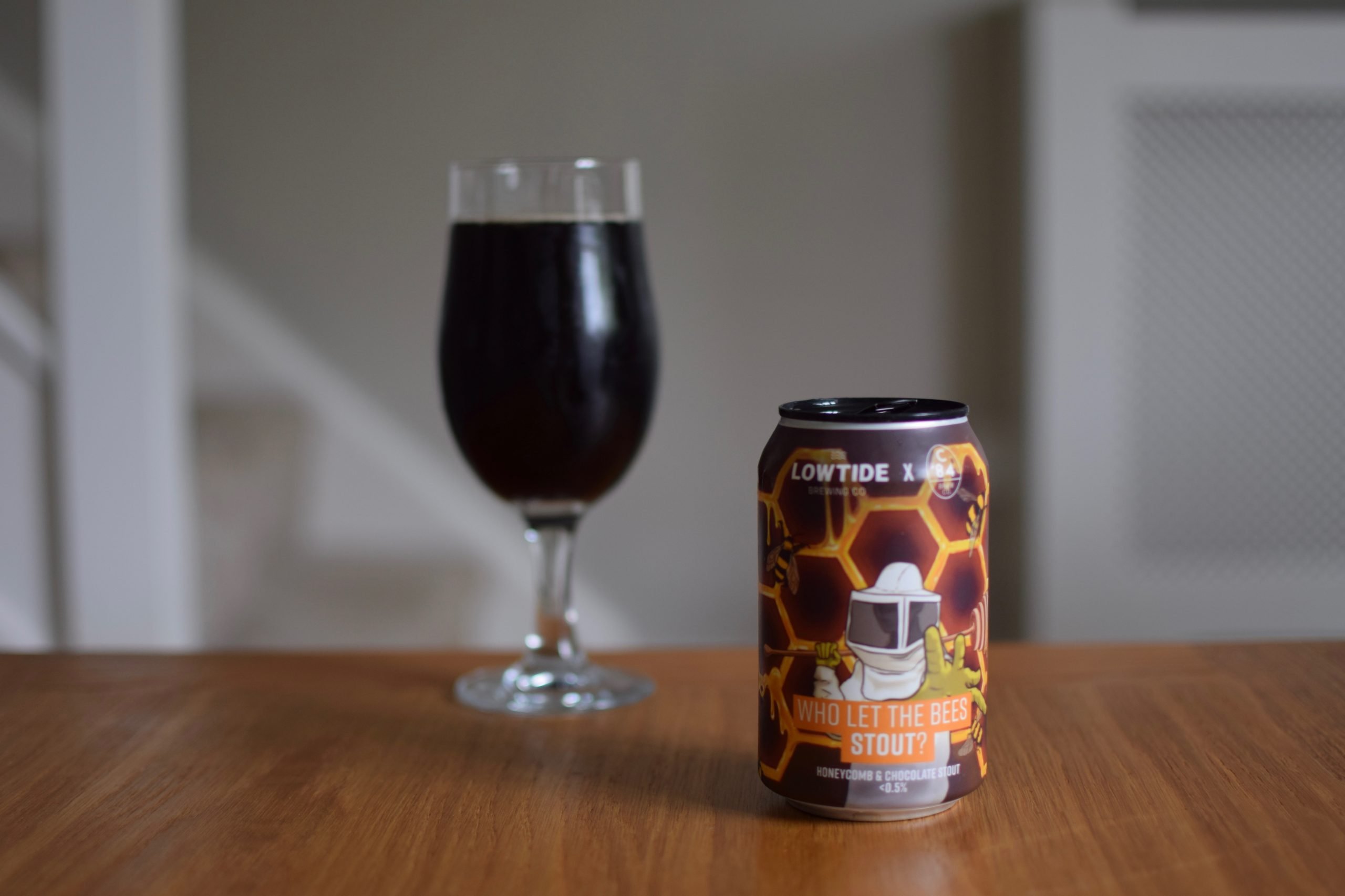