Clausthaler “Original” (also known as “Classic”) is 0.5% lager from Germany. Get tasting notes and info on stockists, carbs, sugar, calories and ingredients, in this review.

The market non-alcoholic beer has exploded in the last few years, thanks in part to innovations in production that have led to a vast improvement in quality.

Yet, the demand for non-alcoholic beer has always been there. Especially so in places like Spain and Germany, where beer lovers have always preferred non-alcoholic beers over sugary or caffeinated drinks when they’re not drinking.

The German brand Clausthaler began developing a non-alcoholic beer in 1972 after first trying its hard at a low-calorie brew. As a specialty non-alcoholic brewery, it decided to take a different approach the breweries that were removing the alcohol from their beers and produce an ultra-low-alcohol beer from the off.

It does this with controlled fermentation, where brewers stop fermentation early before the yeast has had its fill of all the sugars. It sounds simple, but it took Clausthaler many attempts to come up with a drink that looked and tasted like a regular beer.

There aren’t any surprises on Clausthaler Original’s ingredients list – water, hops, yeast and barley malt with a little oomph provided by hop extract.

So it’s not particularly high in sugar. But this could soon as up to around 30g once you’ve had three bottles in one session.

Clausthaler Original pours clear amber with a small head of foam and lots of bubbles.

The mouthfeel and body are also disappointing. It’s heavy but tacky and syrupy.

The bubbles are tight and harsh, on par with the busy carbonation in mass-produced lagers.

Like the aroma, the flavour on tasting isn’t as clean and simple as I’d expect. Again, there’s a solid foundation of lager malt but it tastes dull and stale.

A big hit of overpowering bitterness doesn’t help matters, but the beer gets a lemony sweetness as it warms, which balances the flavours a little.

And while Clausthaler Original is drinkable, there are many tastier “newer” lagers out there. 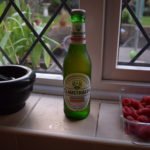