Lindeboom “0.5%” is a low-alcohol Dutch pilsner. Find out how it tastes, plus get info on calories, carbs, sugar and where to buy in this review.

The Netherlands is home to some of the best-known beer brands in the world.

Yet, since I made the switch from drinking mass-produced lagers to craft ale a decade-or-so ago, I don’t recall sampling any Dutch craft beers.

That was until I moved onto non-alcoholic beer, a category where Dutch beer is a common sight on the real and virtual shelves with brands like Vandestreek, Bavaria and specialist no-alcohol brewery Braxzz sitting alongside Heineken’s popular “0.0” lager.

Another Dutch brewery in the low and no market is Lindeboom from the appropriately named village of Neer, not far from the borders with Belgium and Germany.

The brewery, which was named after a nearby lime tree, has a long history, brewing its first beers in 1870. Today, it’s still family owned and is best-known for its flagship pilsner, which it’s produced since day one.

It comes in a 300ml serving with 66 calories, 13.5g of carbs and 6.9g of sugar per bottle, which are average amounts for a non-alcoholic beer.

0.5% pours a hazy burnt orange with a slither of foam once it settles.

The aromas are initially worty like a bedtime malt drink. This soon fades to leave sweet lemon with a small amount of aroma from the pale malts. The lasting aroma reminded me of a radler or shandy, so strong was the lemon.

The mouthfeel is smooth and sticky with a low to medium body and tight carbonation, making it easy to sip. The stickiness means the finish is a bit cloying.

Initially sweet and refreshing, the malt in 0.5% tastes like wet cardboard. I got used to this taste, but it was always there in the background. As with the aroma, the taste is sweet but there’s an easy bitterness at the end of each sip that makes it finely balanced.

Once I got used to the less desirable flavours, I quite enjoyed this beer with its lemony freshness.

My biggest negatives are the sappy nature of the mouthfeel and the dull, cardboardy malt flavours.

Still, I’d much prefer another of these over a sugary soft drink given the choice. 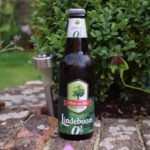