“Lowdown Lager” is a 0.5% CBD-infused beer from the Hop & Hemp Brew Co. Get tasting notes and info on stockists, carbs, calories, sugar and stockists, in this review.

One of the great things about non-alcoholic beer is that you get all the health benefits of beer without the alcohol.

Similarly, CBD (cannabidiol) – one of hundreds of chemical compounds found in cannabis plants – allows you to get some of the benefits of marijuana without the THC (the psychoactive chemical that makes you high).

There’s actually still some debate about the health benefits of CBD. Hence why it’s sold as a food supplement rather than a medicine in most regions. Yet it’s the health aspects fuelling CBD’s growth in popularity.

Now, CBD oil on its own isn’t particularly tasty. That’s why it’s appearing in everything from brownies to vape juice.

And beer. Some established breweries such as Leeds’ Northern Monk have produced the odd CBD-infused special. Specialist CBD breweries are also popping up, focusing their efforts on CBD beers only.

London-based Hop and Hemp focuses exclusively on non-alcoholic CBD-infused beers. So far, it’s produced an IPA, a double IPA and this “Lowdown Lager”.

Hop and Hemp doesn’t remove the alcohol from its beers.

Instead, each beer is brewed to contain less than 0.5% of alcohol. It’s not clear at what point the CBD is added, but the aim is to make sure any hemp flavours complement the flavours provided by the malt, yeast and hops.

The malt in Lowdown Lager is pilsner malt, the hop varieties Saaz and Perle. There’s also some oats and some maltodextrin, a processed but natural additive.

There’s 8mg of CBD per 300ml serving. It’s suitable for a vegan diet.

Lowdown Lager pours as you’d expect from a classic pilsner-style lager. It’s clear amber, with a good dose of fizz that creates a thin white head.

The aroma is superb. It’s clean and simple, yet still complex enough to make it more interesting than your run-of-the-mill lager.

Led by biscuit and cracker maltiness with a touch of caramel and dab of honey, the hops offer dried herbs and white pepper.

The mouthfeel is slightly tacky. There’s a light body with just enough fizz to tickle your tongue and throat without any aggression like so many mass-produced lagers.

On tasting, there’s minimum maltiness and bitterness and none of that spice from the aroma.

Instead, it’s a light peach taste, which may be a by-product of the yeast, that leads the flavour. Some grassiness from the hops is also present.

It’s a pleasant flavour and similar to other lagers that limit fermentation to under 0.5% ABV. But not what I’d expect in lager.

The finish is dry, despite the low bitterness.

It may not have all the flavours of a typical pilsner and the body may be on the lighter side, but Lowdown Lager isn’t a terrible beer. And it’s a handy way to consume CBD without fiddling about with oils or other methods.

The aroma – showcasing the characteristics contributed by European hops – is superb.

I prefer the brewery’s IPA. But I’d also drink this again. 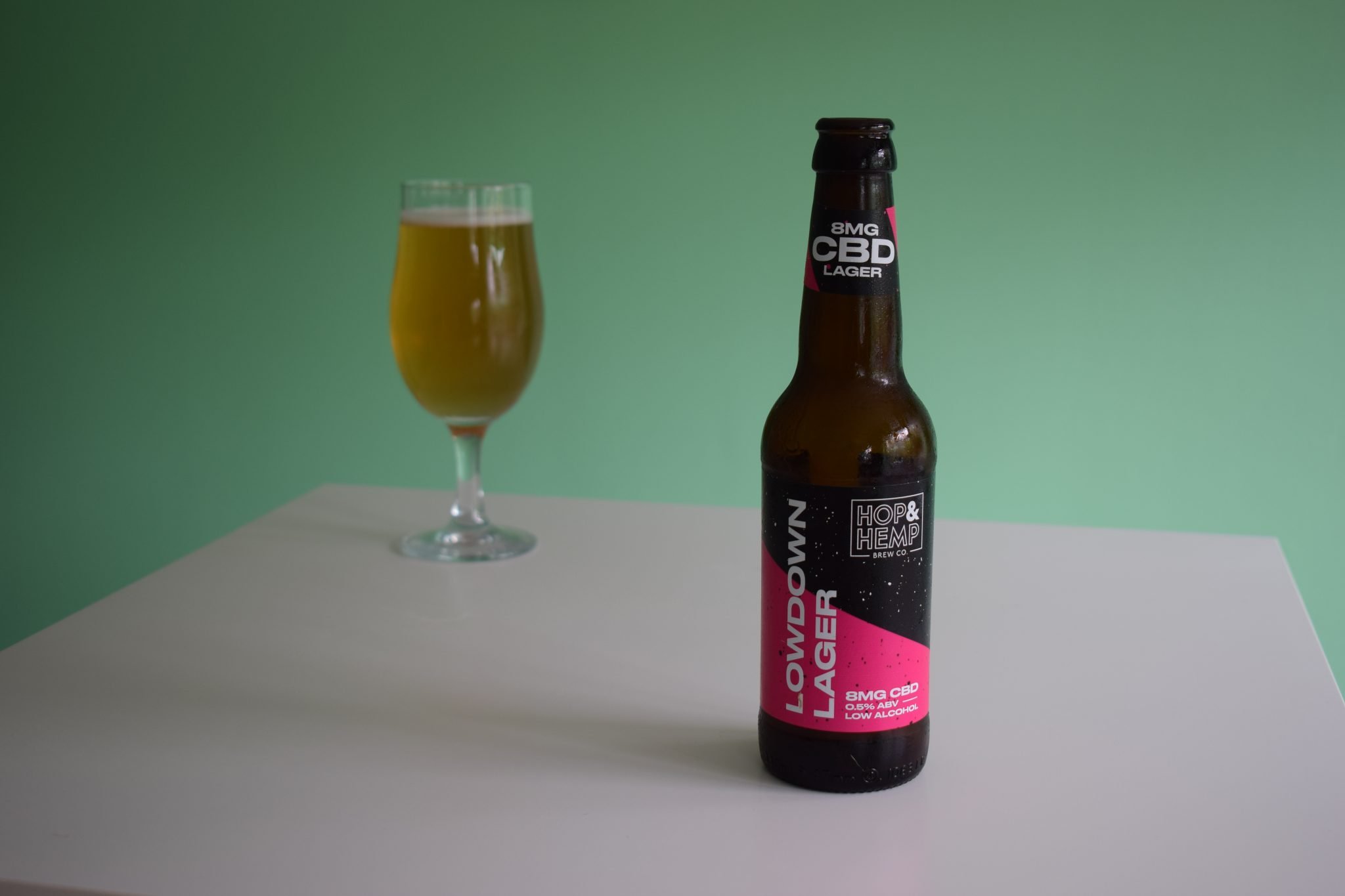