“Yuzu Pale Ale” is a fruit-infused 0.4% pale ale from Drop Bear Beer Co. Get tasting notes, plus info on calories, ingredients and stockists in this review.

One of the most interesting things about reviewing nigh on 100 beers over the last 18 months has been learning about some of the ingredients brewers use in their alcohol-free beers in addition to water, yeast, hops and grain.

These range from the nice (like fruit) to the not-so-nice (like colouring and flavouring). And, the downright odd (guarana).

Drop Bear Beer Co’s “Yuzu Pale Ale” uses an ingredient that’s both nice – because it’s a fruit – and odd – because it hails from East Asia and this country boy had never heard of it before.

If you’re more sophisticated than me (it’s not difficult), you’ll already know the fruit from the name of the beer. The yuzu is a citrus fruit, which originated in China and is now mostly grown in Japan. You can find it in UK supermarkets apparently, although I’ve never spotted it because I rarely buy anything other than humble apples, bananas and the odd lemon.

The flavour of a yuzu is acidic and tart with an intense aroma. It’s beginning to sound like it fits well in a beer already and it will may be a fruit we see a bit more as Japanese food and ingredients become more high profile thanks to the upcoming 2019 Rugby World Cup and 2020 Olympic Games.

Drop Bear’s Yuzu Pale Ale is one of the brewery’s launch beers, released in spring 2019. Drop Bear is based in Swansea, South Wales and owned by Sarah McNena and Joelle Drummond.

The yuzu in this beer is yuzu extract rather than juice or pulp. It also uses three US hops (Chinook, Cascade and Centennial) and a semi-complex mix of Munich, Caramalt and double-roasted crystal (DRC) barley malts alongside wheat malt and flaked oats.

The resulting calorie content is ultra low – just 25 calories a bottle or 7.5 calories per 100ml. This means it’s low in carbs and sugar too with 1.3g of carbs and 0.3g of sugar per 330ml bottle.

Yuzu Pale Ale pours a shady amber, clear with a modest caramel head of foam that leaves a little lacing before it disappears as you drink it.

The Caramalt and DRC grains provide a caramel and toffee creme brulee style aroma that mixes with the yuzu to add a hint of clementine. There’s also a little raisin, possibly due to the DRC malts. The aromas build as it warms. So you might find it better to ignore the advice on the label to drink it “bloody cold”.

The body is light, lacking stickiness that leaves it feeling quite watery. Understandable for a low calorie, low carb ale.

The light body creates a fizz with the carbonation more akin to a sparkling water.

This beer isn’t sweet but it’s well balanced because the bitterness is light touch. The flavour is less varied than the aroma, which dulls the tastebuds somewhat.

The main flavour is caramel malts, with the yuzu creating a lime-like bitterness that partners with the bitterness from the hops. And although there’s not much going on after the initial hit of flavour, there’s a pleasant caramel aftertaste.

For a low calorie, low sugar AF beer, this is pretty decent despite the light body.

The aroma is nice enough and the flavours offer much more variety than many other non-beer alcohol-free alternatives. 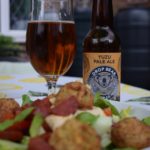