“Lo-Fi” is a music-inspired 0.5% pale ale is from London’s Signature Brew. Get tasting notes and info on ingredients and stockists in this review.

There’s only a couple of ways I associate beer with music.

One is as a means to drum up some courage to take my hand out of my pockets and join the dance floor – pre-pandemic of course. (Tip: This doesn’t work as well with non-alcoholic beer.)

The other is the poor quality of the beer on offer at gigs and festivals.

I doubt any breweries can help me with my phobia of public shape throwing. But there is one brewery that can help with the beer at music events conundrum.

Signature Brew’s mission is not only to produce great beer, but to bring them to music-led venues and festivals. No more warm, bland, overly fizzy lager? Sounds good to me.

The brewery was founded in 2011, collaborating with indie band The Rifles on one of its first beers. Since then, it’s collaborated with scores (pun intended) of musicians including Frank Turner, Slaves, Mogwai and Lightyear.

The names of the brewery’s core beers are music-themed, naturally, with Roadie IPA, Studio Lager and Backstage IPA among its core beers.

All that’s missing is something non-alcoholic. Enter “Lo-Fi”, a 0.5% hazy pale ale.

Lo-Fi is brewed with Simcoe hops, which are known for their earthy, woody, piney flavours.

There’s no info on the barley malt variety. Oats are included in the grain bill.

Lo- Fi also contains glycerol, something I haven’t seen included in a non-alcoholic beer before. Glycerol contributes to the body and can influence the flavour.

The ingredients, processes and packaging are suitable for vegans. But this beer isn’t gluten free.

Disappointingly, there’s no nutritional info available for this beer.

So you might want to give it a miss if you’re counting the calories or watching your sugar intake.

The brewery isn’t lying when it describes this as pale. Pouring more like a cloudy apply juice than a beer, it’s camel-coloured and opaque.

There’s a touch of fizz that leaves a few clumps of foam clinging to the edge of the glass.

It looks ace, if unorthodox.

The aroma is ace and unorthodox too. Leafy, woody, fruity and complex, there’s pine, mango, pineapple and toffee with the pine growing in strength as it warms.

The body is on the lighter side, but it’s aided by the weight of the haze. The carbonation produces small but prickly bubbles.

Pale malts feature more in the taste than in the aroma, but the maltiness is overwhelmed by more pine supported by a touch of green stem and fresh grass. There’s a squeeze of grapefruit in there too.

The hops offer a medium bitterness that matches well with the sweeter flavours.

Amazing aroma, standard mouthfeel and an underwhelming – but acceptable – taste.

If you like your pine flavours, Lo-Fi should be top of your list. For everyone else, it’s still a much better option than many other alcohol-free alternatives – especially if you’re at a gig. 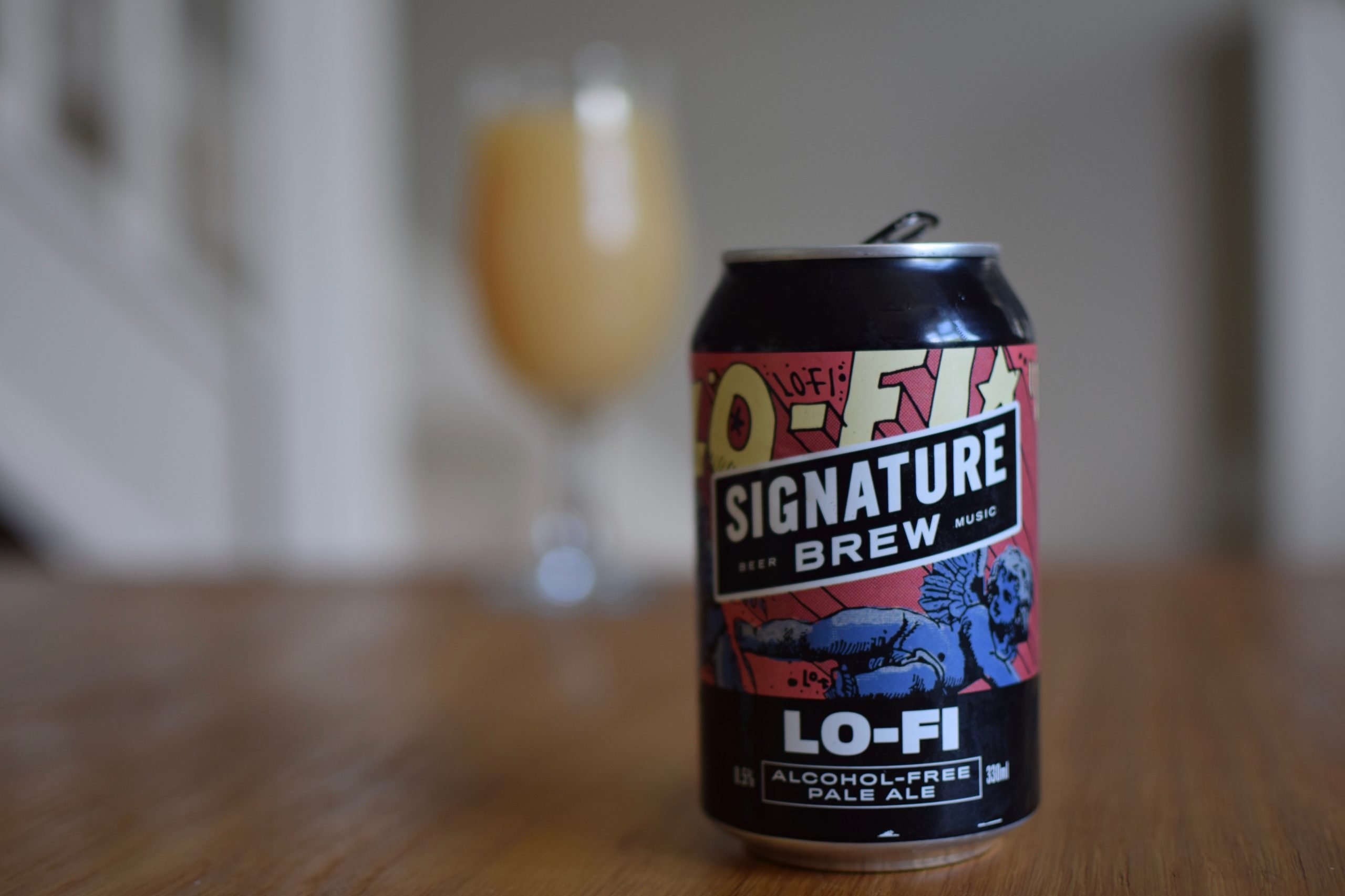