Big Drop’s “Hazelnut Porter” is a nut-flavoured 0.5% dark beer. Get tasting notes, plus info on stockists, calories, carb/sugar content and ingredients, in this review.

What’s the difference between a porter and a stout?

Historically, stout was simply a stronger – or stouter – version of a porter, which is a beer that first came to prominence in 18th century London.

Said to be named after the city’s street porters that made it their go-to tipple, porter was probably brewed as a smokier, more bitter alternative to sweet brown ale.

Importantly, the style was suited to the hard water that London (and Dublin) brewers had access to – unlike pale ale, which was more suited to the softer water of the Midlands.

The porter and stout styles evolved further in the 19th and 20th centuries, thanks to new malting techniques, which allowed brewers to use less roasted malts to achieve dark colouring, and the occasional addition of new ingredients such oats and lactose (milk sugar).

Nowadays, porters and stouts can come in at anything from 3.5% to 10% ABV – sometimes more. But many beer experts agree that, while stouts aren’t necessarily stronger in alcohol, they’re usually stouter in terms of flavour and body.

This is why we’re now seeing both porters and stouts turning up as sub-0.5% non-alcoholic drinks as well. After all, there’s not much room for manoeuvre there if we’re comparing the ABV of non-alcoholic stouts and porters.

Specialist non-alcoholic brewer Big Drop Brewing Co’s first beer was a stout, and is one of the defining beers of the new wave of low and no alcohol drinks.

Now it’s added this porter to its range.

On first glance, “Hazelnut Porter” (or “Off Piste” on its new branding, which Big Drop’s rolling out as I type this), looks similar to its stout with the same basic ingredients – water, barley malt, lactose, hops and yeast.

The only addition is hazelnut flavouring.

The hops in this one are the Challenger variety,

The calorie, carb and sugar count is also similar, although the porter has a lot less sugar than the stout.

Hazelnut Porter looks black on pouring, but it’s dark ruby when you hold it to the light. It has a hefty, fluffy caramel head initially, calming to a decent ring of foam around the glass as you sip.

A roasted maltiness dominates the aroma, which is joined by puffs of coffee and lemon with the maltiness turning smokier as the beer warms.

Despite its substantial head, Hazelnut Porter has light carbonation, but it’s far from flat. The body is light and a bit of a let down despite the presence of lactose, which can usually help give a beer a little weight.

The smokiness in the malts reveals itself instantly on tasting. There’s a touch of bitterness, which feels like it’s from the roasted malt flavours rather than the hops. There’s also a little cocoa with a slightly sour, lactic tang.

The hazelnut? I detected a little in the aftertaste, but nowt elsewhere.

So what’s the difference between a Big Drop porter and a Big Drop stout?

Well, I bloody love the stout. The porter? No so much.

Still, it has some nice flavours and aromas and is a great low-sugar alternative to soft drinks like cola and juice. 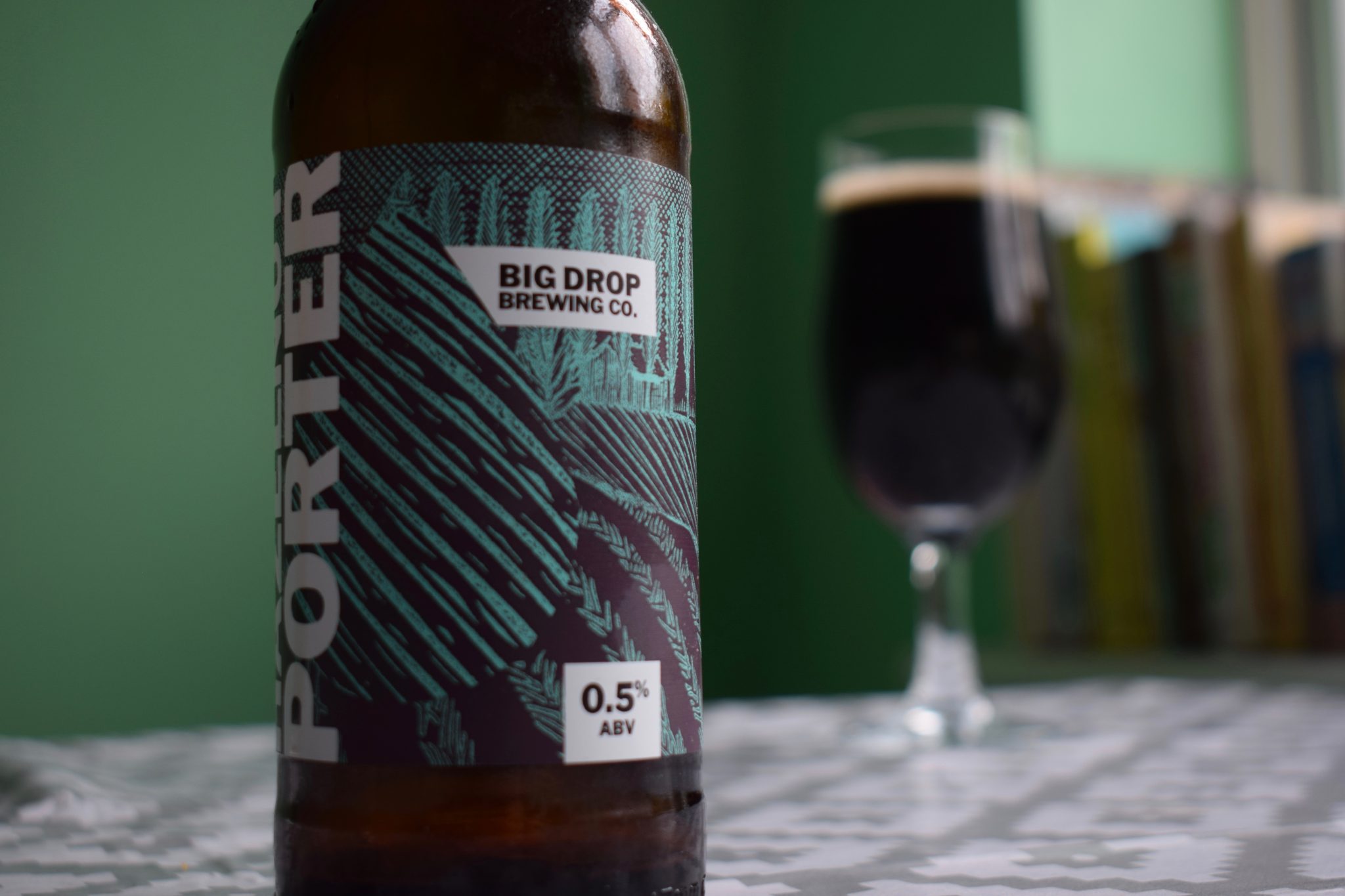