Big Drop “Brown Ale” is a deliciously smokey and sweet English-style brown ale. In this review, get tasting notes and find out where to buy it, what ingredients its has plus its nutritional info including carbs, sugar and calories.

There are few things I enjoy more than settling into a country pub on a cold and rainy day with a decent pint of cask-conditioned traditional bitter.

Nowadays, with an almost one-year-old to look after, this is something I rarely get to do. And it’s not an experience that’s easy to recreate at home. Full-strength bottled bitter never comes close to what you get from a pub’s hand pull. And my forays into the world of bitter-style alcohol-free beers have been underwhelming at best.

Big Drop Brewing Co‘s latest release isn’t meant to be a traditional bitter. But it has the potential to fill that void in the alcohol-free beer world. Simply called “Brown Ale”, it’s brewed as an English-style brown ale. This should mean minimal hop aroma and bitterness compared to US-style brown ales.

Another characteristic of English brown ales is their low ABV. That’s a non-negotiable here – like Big Drop’s other beers, this comes in at just 0.5%.

Big Drop usually use lactose (milk sugar) in their beers to add body and sweetness and that’s present in this beer. So it’s not suitable if you’re on a vegan diet.

Alongside barley malt, there’s also some wheat in the grain bill.

Brown Ale pours a tawny colour with a caramel head that foams up initially but settles down to leave a satisfying slither on top.

It’s fabulous on the nose – a smokey maltiness is backed with vanilla and cocoa and a dash of coffee. It’s not far off the cocktail of smells you get in a busy country pub on a winter’s day.

In the mouth, it’s a touch watery but is hard to tell apart from a higher-ABV brown ale. The carbonation is tight but gentle, making it almost on par with a cask-conditioned beer.

The smoky malty theme continues in the taste. There’s a hint of caramel sweetness that balances well with the smoky flavours. There’s no danger of the sweetness becoming sickly after a few sips.

As per the style guidelines, there’s only a touch of bitterness. Mix this with the fruitiness presumably created by the yeast and it conjures up flavours of dark dried fruits like currant and plum.

The finish is quite dry and a little cloying, which makes you want to go in for another sip.

Many alcohol-free beers are chocked full of aromatic hops of overly bitter. So Big Drop’s Brown Ale is perfect if you’re after something a little more understated.

The smokiness is velvety rather than stifling and the vanilla, cocoa and coffee flavours will appeal to fans of porters and low-ABV stouts.

Another excellent beer from Big Drop. 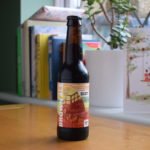