“Wheesht” is a ruby alcohol-free (0%) ale from Scotland’s Harviestoun Brewery. In this review, get tasting notes and info on stockists, calories, carbs, sugar and ingredients.

One of the great things about drinking non-alcoholic beer is that you can cut down your alcohol intake while still supporting small and medium breweries.

But that’s only recently been the case. Traditionally, it was only big brewing corps like Guinness (Kaliber) and AB-Inbev (Beck’s Blue) that were producing alcohol-free beers.

Latterly, they were joined by specialist alcohol-free breweries that are using special equipment or innovative methods (or a mix of both) to produce their beers.

Recently, regional breweries and the odd microbrewery have also entered the non-alcoholic beer market proving that it’s not just limited to big beer or niche companies.

The brewery behind non-alcoholic ruby ale “Wheesht”, Harviestoun, has been most of these incarnations in its time.

Wheesht is currently the brewery’s lone non-alcoholic beer. But it did launch a 2.8% pale ale around the same time.

The brewers have used a long list of ingredients to produce this 0% beer. First, there’s malted barley, which the brewery sources from a maltings just four miles down the road.

The brewery hasn’t shared how they make Wheesht but that ingredients list makes it seem unlikely it’s gone through any industrial processes.

The finished brew is low in sugar – just 0.3g per 330ml bottle. There’s only 6g of carbohydrate in total and 53 calories per bottle.

Wheesht pours a dark plummy purple with a good sliver of white foam.

A common issue I always seem to come across in 0% dark beers is a half-fermented worty aroma and that’s present here. Luckily, there are some pleasant liquorice and chocolatey roasted malt aromas to shield off the wort. After a while, it blends in and you forget about it.

On sipping, there’s a decent medium body and smooth carbonation, beckoned by all that soft foam on top. It’s tacky rather than sticky, with a dry finish.

The flavour is initially dominated an overwhelming bitterness from the hops and roasted malts.

But once your tastebuds take a break, a few more flavours make an appearance – raisin and plum and a crumb of biscuit, which complements the bitter flavours despite not bringing a great deal of sweetness to the taste.

This is a fair stab at a non-alcoholic dark beer, with a decent full body and creamy carbonation.

It might appeal to fans of bitter ales, although I’d like to have had a bit more variety in the flavour to cut through the bitterness. 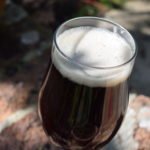