When medieval brewers first started adding wild hops to their beers as a preservative, who’d have known modern brewers would have such a choice of hops at their disposal?

It’s also thanks to an explosion in hop breeding programmes in the late 20th and early 21st centuries that more varieties have become available.

Some hop types, which have become staple in many craft beers including many non-alcoholic ales and lagers, were only recently created.

For instance, the Citra hop only came onto the market in 2007 but it’s now in thousands of beers. Even the Challenger hop, common in traditional English ales, is relatively new, first released in 1972.

However, many classic hops have survived the trend for using modern varieties in craft beer. This includes East Kent Goldings (also known as Canterbury Golding), which came to market in the late 1700s.

Considered a quintessentially British hop, it’s used in many traditional UK ales as well as some Belgian beers.

Coast is a Scottish company, but brews its beers at De Proufbrouwerij in Belgium, which is also the brewery Mikkeller uses to produce alcohol-free beers including Henry and His Science and Racing Beer.

Along with the East Kent Goldings hops, this brewery uses a mix of pale and pilsner malts and wheat in the grain bill. I wouldn’t be surprised if Coast had access to Mikkeller’s low-alcohol yeast strain ‘mikkellensis’ for this one. If so, it’s unlikely the brewery has to remove any alcohol following fermentation.

Farmhouse Ale looks a beauty on pouring, living up to its name with a murky brown colouring and a rustic slab of foam up top.

The aroma is varied if unconventional. A sharp tangy cocktail of pineapple, mango and rhubarb mix with traces of tangerine, honey and pale malt to create an earthiness that belies its farmhouse label.

The medium body is great, with a smooth mouthfeel and tickle of velvety carbonation. It’s sticky but doesn’t feel cloying like many other AF beers.

The tang from the aroma continues in the taste, but it’s missing the harsher acidity that would slip it into the sour beer category.

After the hit of sourness, it’s sweet with a small amount of bitterness pushing through after a few sips. There’s less variety in the flavour than in the aroma with tangerine and rhubarb sitting on top of some light maltiness.

As with the Mikkeller non-alcoholic beers, it feels like the fruitiness comes from the yeast, bit it’s likely this mixed with flavours from the malts and hops that’s producing this unusual yet tasty flavour.

Coast Beer Co’s Farmhouse Ale certainly lives up to its billing. It’s unusual on first taste yet strangely alluring once you’ve had a few sips.

If your palate is flexible and adventurous, give it a try, especially if you enjoy Mikkeller’s non-alcoholic beers. Just don’t expect a typical pale ale in your glass. 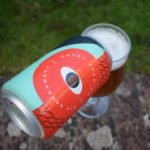