Old Speckled Hen Low Alcohol is a 0.5% ABV version of Greene King’s 5% Old Speckled Hen. Get tasting notes, learn about the ingredients and find out nutritional info including calorie content in this review.

A big challenge for brewers of low and no alcohol beers is that many beer drinkers are forever comparing them to our favourite standard-strength beers rather than an alternative to other non-alcoholic drinks when we’re not drinking alcohol.

Of course, there are now lots of alcohol-free beers that are better than many beers that contain alcohol. Yet the reality is, while there are thousands of sub-standard alcoholic beers out there, it’s only the good ones we use as a yardstick when sampling a new alcohol-free or low-alcohol beer.

This type of comparison is even more of a challenge for breweries creating non-alcoholic versions of their current full-strength beers. If you give the no or low alcohol version to a big fan of the original, they’re more likely to be disappointed if the non-alcoholic version doesn’t come up to scratch.

This hasn’t stopped a few breweries creating alcohol-free versions of their most popular beers. One of the latest to do this is Greene King under the guise of the Morland brewery, which it took over in 2000. It’s created a 0.5% low-alcohol version of its popular “Old Speckled Hen” beer.

The full-strength version of this beer has been around since 1979 and is a staple in Green King pubs (from the cask rather than bottles) as well as supermarkets and convenience stores.

It’s not clear whether the low alcohol version is a new recipe or simply the original with the alcohol removed. As with the original, it uses Pale and Crystal malts and Challenger, First Gold and Goldings hops – staple ingredients in many British ales.

Some of the other ingredients might upset the purists – there’s also malt extract, hop flavouring and caramel colouring (E150C). (These might also be in the original, but UK producers of drinks over 1.2% don’t have to list the ingredients.)

Pre-tasting, Old Speckled Hen Low Alcohol shares a lot of features with its sibling, including near-identical packaging and colouring (both beers comes in a clear bottle).

Mahogany in colour, it looks like a typical best bitter in the glass, translucent with a beige-brown head.

I wasn’t blown away by the aroma.

Lacking sweetness, I can’t work out if the main aroma was wort or stale-smelling malt. There’s also a medicinal aroma in there, much like that of root beer. And a light aroma of wet cardboard.

Unlike hop-forward ales like Ghost Ship 0.5 that use US hops, there’s no hoppiness in the aroma apart from a little earthiness, probably provided by the Goldings hops in this.

The mouthfeel initially felt synthetic, but it’s got a good body (similar to the original version) and a lovely amount of smooth carbonation that could rival a cask beer.

The wortiness/stale maltiness leads the taste. There’s smidgen of caramel flavours too but I found the wortiness overpowering.

There’s a touch of sweetness mid-sip, but not enough bitterness to balance it. In fact, I found the bitterness hard to detect until I’d taken a few sips.

The aftertaste lacks flavour, making it a little like soda water.

But what about if you don’t know the original or don’t drink any alcoholic drinks? I fear you might be disappointed too.

If you’ve enjoyed beers like St Peter’s Without, Old Speckled Hen might be a good fit for you. If not, I’d give it a miss. 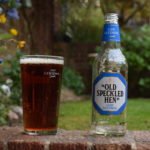