“Punk AF” is a low-alcohol (0.5%) version of Brewdog’s full-strength “Punk” IPA. Get tasting notes, find how it’s made and get info on stockists and ingredients, and calorie, carb and sugar content.

One of the problems with Scottish brewery Brewdog’s “punk” ethos is it keeps doing stuff that’s, well, just not really very punky.

Take the brewery’s decision to take legal action over a pub because it had the same name as a Brewdog-owned range of spirits. Or when it stopped another bar from trademarking the term “draft punk”.

Some might even say that partnering with multinational supermarkets and Wetherspoon pubs goes against the punk ethos. Then again, it’s not like the Ramones and the Sex Pistols only sell their music in independent record stores.

One element of the punk ideology Brewdog definitely does embrace is non-conformity. Raising much of its capital through crowdfunding rather than bank loans, Brewdog built its business on brewing mid-ABV American-style craft beers when it seemed like every other brewery in the UK was producing only traditional cask ales.

It supplemented these beers with the occasional one-off publicity-inducing beers such as “Tactical Penguin”, a 32% ABV beer, to the wrath of regulators and industry bodies.

Ironically, it was Brewdog’s response to the furore created by these extra-strong beers that led it to brew another non-conformist beer, the 0.5% “Nanny State” at a time when few breweries would even consider making a low or no alcohol beer.

Since then, hundreds more non-alcoholic and low-alcohol beers have come into the market. Now Brewdog’s adding to that list with its third alcohol-free beer, a 0.5% version of its flagship IPA, “Punk”.

How Punk AF is made

Rather than remove the alcohol after fermentation, Brewdog produce a wort that’s low in fermentable sugars to make its Nanny State beer. And it looks like that’s what they done with Punk AF.

The grain bill includes wheat and flaked oats alongside Caramalt and Munich malts. This is complemented by eight varieties of hops – Cascade, Chinook, Citra, Mosaic, Nelson Sauvin and Simcoe as well as two types not featured in the original Punk, Hüll Melon and Ahtanum.

There’s the milk sugar, lactose, in this brew too. So it’s not suitable for vegans.

Punk AF has a few more calories versus Nanny State – 50 calories in a bottle compared to 26.

Punk AF pours a light straw colour – quite a lot lighter than the original I fancy. The first bottle I tried looked a bit flat, with hardly no head or lacing. But the second (from the same batch) looked better in the glass, with a modest white head.

That hop focus is evident in the aroma. It begins skunky and spicy with pine, citrus and tropical fruits coming out as the head settles. As it warms, a weak aroma of caramalt is backed by sweet and sticky mango.

The aroma is understated compared to some IPAs, but complex and interesting all the same. Importantly, it sets you up for a sip.

The mouthfeel isn’t quite as impressive, with a thin body giving away its cover as a low-alcohol beer. There’s good carbonation, but it feels harsh and prickly. The finish is dry and tacky.

It’s the malts that come to the fore in the taste assisted by herby, grassy and mango flavours. There’s a dash of bitterness, which is all it needs.

Overall, the taste is nicely balanced yet feels like it’s missing a vital element and ends up a little flavourless and watery.

The aroma – and the hype – behind Punk AF promised so much. But, despite that gorgeous and varied aroma, it falls a bit flat.

Yet, it’s still a decent drop. And because it’s likely to be available through Brewdog’s current sales channels, it will make a nice option when faced with limited alcohol-free choices in supermarkets and pubs.

Compared to Brewdog’s other pale ale, Nanny State, Punk AF has fewer varieties of malt and more varieties of hops.

This is definitely reflected in the aroma and taste of the two, with Punk AF having a more intense aroma and Nanny State showcasing a maltier and more diverse flavour profile. 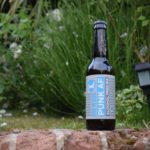