Southwold is a low-alcohol pale ale by M&S, produced by Adnam’s. Get tasting notes, calorie info and more in this review.

Overall beer sales have dropped 25% since 2004. Not that you’d guess that by walking through the alcohol section of your typical supermarket.

Sure, you still find shelves full of the usual mass-produced lagers like Stella, Kronenbourg and Carlsberg. But you’ll also likely find a good selection of everything from IPAs and stouts to bitters and pilsners.

In my experience, M&S is one of the better supermarkets when it comes to beer options. Through a partnership with beer retailer Real Ale, it offers a good choice of beer from smaller independent breweries alongside the beers you find in every supermarket these days. It also teams up with breweries such as Arbor, St Austell and Oakham to produce own label beers.

Unfortunately, there’s little choice of low-alcohol and alcohol-free beers at my local M&S. But it does sell a couple of own label 0.5% ABV beers, including “Southwold”, a pale ale made by Suffolk’s Adnams brewery.

Southwold started life as a 2.7% ABV beer. Now, at 0.5%, it slots nicely into the same alcohol-free category as ales like Brewdog’s “Nanny State“, Infinite Session’s “Pale” and Big Drop’s “Stout“.

Despite being made with chinook and cascade hops, which are well known for adding aromas such as pine, grapefruit and spice, this beer doesn’t offer much on the nose initially. However, a sweet, malty aroma does come through once the beer warms up. But there’s little sign of those hops, which may have been down to the age of the beer – at the time of drinking, there were only four months left until the best before date.

In the mouth, the beer has a medium body and is a little syrupy compared to a standard beer. There’s low carbonation but it’s far from flat and more like a cask ale than a fizzy bottled lager.

Like the aroma, the taste is a little elementary initially. There’s four types of malt in this beer, leading to a dry, roasty flavour. Some caramel makes an appearance the more you drink. There’s some wortiness in the aftertaste. But it doesn’t ruin the beer like with many 0% ABV beers.

The hops only serve to add bitterness, which I found a notch or two too much.

Southwold is hit and miss. It certainly got better as it warmed up but it was a little dull overall, with a one-dimensional aroma and a little wortiness. That said, it’s decent enough if you’re left with no other options.

The lack of hoppiness is disappointing for a pale ale. But it does mean this beer is a good option if you’re looking for a non-alcoholic alternative to a full-strength bitter. 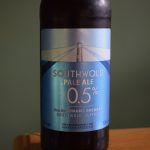