St Peter’s “Without Gold” is an alcohol-free golden ale. Find out how it tastes and get info on where to buy it, calories and ingredients in this review.

Suffolk’s St Peter’s Brewery is probably best known for it’s distinctive oval-shaped 500ml bottles and as one of the first established breweries to tinker with producing an alcohol-free beer.

“Without Gold” is the follow up to the brewery’s first non-alcoholic beer, “Without Original“. Brewery owner John Murphy was the catalyst behind its foray into non-alcoholic beer – John was forced to give up alcohol for health reasons but continued to yearn for his beloved beer.

St Peter’s also produces an organic version of Without to go alongside the normal-strength bottled and cask beers that have been a feature of the brewery since it opened in 1995.

St Peter’s makes this non-alcoholic brew using a fermentation method that doesn’t produce a lot of alcohol, then strips out the remaining alcohol. As well as typical beer ingredients – yeast, water, hops and barley malt – it also includes maize, presumably to aid the beer’s light colouring.

Not surprisingly, Without Gold pours a light straw-colour. It’s not lively out of the bottle, but forms a mid-sized head that disappears to leave an inviting layer of foam on top. The beer is clear and makes a good looking pint.

Instantly, the smell marks Without Gold out as a beer that’s had limited fermentation. It’s worty, yeasty and savoury. There’s a hint of sourness, but no signs of the citrus aroma promised by on the label.

Although a little syrupy, the mouthfeel is good and similar to that of a full-strength beer. It’s lightly carbonated but far from flat, with lots of small bubbles that dance around on the tongue to bring out the flavours.

I couldn’t get on board with the taste of this beer. The bitterness hits you hard when you take you first sip. Again, there was no sign of the citrus flavours heralded on the labelling. The main flavour is the wortiness from the aroma transferring from nose to mouth on drinking. There’s also a corny taste lingering in there, possibly due to the addition of maize.

The finish is also very bitter, which puts a stop to you drinking this down too quickly. I didn’t find it very refreshing, unlike a classic golden ale.

Like with my other experiences with zero alcohol beers that have limited or no fermentation, I found the smell and taste of this beer too savoury and too bitter.

If you’re new to beer, have an open mind and are searching for an alcohol-free drink, you might like Without Gold. But if you’re looking for a non-alcoholic substitute for your favourite golden ale, I’d give this one a miss. 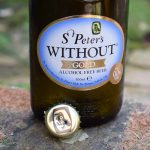