Infinite Session “Pils” is the brewery’s alcohol-free lager offering. Get tasting notes and nutritional info in this review.

If you thought the recent boom in breweries producing real ale and craft beer would chip away at lager’s market share, you’d be wrong.

Yet, this doesn’t mean there’s lots to celebrate in the boardrooms of the biggest lager producers like Budweiser, Stella Artois, Carling, Heineken and Carlsberg. Overall sales of beer are down and many consumers, craving quality products, are shunning mass-produced lager and instead spending their cash with smaller producers.

Now, with the popularity of alcohol-free drinks on the rise, the big beer corps are offsetting some of their losses with a range of alcohol-free lagers. However, they’re not going to get it all their own way here either. Those pesky smaller producers, driven by passion rather than profit warnings, are ready to nip in to steal some of their customers.

One of these producers is Infinite Session, a two-year-old “cuckoo” brewery that already has good form in the alcohol-free beer market with an American pale ale and a IPA.

Like Infinite Session’s other creations, Pils comes in at 0.5% ABV. Unlike the original version of its bottled pale ale, there’s no lactose in the ingredients making it suitable for a vegan diet.

The grains alongside malted barley are wheat and oats.

As with Pistonhead’s non-alcoholic “Flat Tire” and many other NA lagers, the first iteration of this beer was dry hopped with tropical, new-world hops.

This new version, released this summer, use the more traditional Hallertau and Saaz hops – a staple in many German and Czech pilsners.

The effects of the hops is evident in the aroma as soon as you crack it open, with a snazzy flowery, herbal aroma that floats over a light maltiness.

Smoother than most would expect from a lager, Pils is highly carbonated and has a decent, medium, velvety body. It pours cloudy straw-colour and foams up nicely to leave a modest head.

The previous version of this pilsner was sweet and fruity. A different yeast has take a lot of the fruitiness out of the flavour, swapping it for a more pils-typical herbiness that sits on your tongue for a while after each sip.

As with the aroma, there’s a malty foundation that works nicely with the herbiness.

The first version Infinite Session’s Pils was all about the tropical flavours from the hops.

This new version, made with a different yeast and traditional pilsner hops is all about the floral, herby flavours and will please pilsner drinkers as well anyone with an adventurous palate. 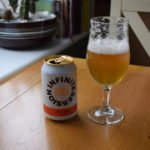