“Zero Fear” is a 0% stout-style beer from Rok Soba and Nirvana Brewery. Find out how it tastes, plus get info on stockists, ingredients, calories, carbs and sugar, in this review.

With its heavy malt profile and an ABV that typically ranges from 4% to 10% or more, stout isn’t a natural fit when it comes to low and no alcohol beer.

Yet it was Big Drop Brewing Co’s “Stout” (along with Brewdog’s “Nanny State” pale ale) that first convinced me that non-alcoholic beer doesn’t have to be rubbish.

Since that magical moment, I’ve sampled a few non-alcoholic stouts. But none have come close to the quality of Big Drop’s offering. So I was excited to get my hands on Rok Soba’s “Zero Fear Beer” – a 0% stout.

Rok Soba isn’t a brewery but a lifestyle brand founded by brothers Lee and Shaun Fennings.

Their aim is to inspire and support anyone who’s considering sobriety or has given up alcohol. They sell clothing and accessories through their website and organise events, donating money to addiction-related charities.

Lee and Shaun enlisted the services of East London’s Nirvana Brewery to produce this beer. Nirvana was one of the UK’s first specialist low/no breweries and already produces several non-alcoholic beers – including a stout.

There’s a high chance that Zero Fear Beer is a repackaged version of Nirvana’s stout as it shares the same ingredients (minus vanilla) and nutritional content.

Like Nirvana’s stout, it’s also gluten free and suitable for a vegan diet.

The ingredients are chocolate flavouring alongside hops and malted barley (and water of course). A bottle of Zero Fear Beer contains 66 calories with 16g of carbs and 9.2g of sugar.

Zero Fear beer looks jet black in the shadows; a tinge of plum when held to the light. On pouring, it generates a quiffy toffee-coloured head that clings to the side of the glass as you drink it.

The initial aroma is unfermented wort, but you soon get used to it and it’s hard to detect after a few sniffs. Which is just as well, as it allows your focus to switch to smells of liquorice supported by whiffs of coffee, toasted grain, chocolate and seaweed.

The body is a little lighter than it looks in the glass but it’s pretty good considering this is a 0% beer and there’s no additions like lactose, wheat or oats in the recipe. The carbonation is understated and smooth as it slides down.

The wortiness from the aroma isn’t as significant in the flavour, opening up a path for more liquorice with the chocolate (more milky than dark) coming through in the aftertaste.

There’s a lack of bitterness initially, which highlights how sweet this beer is. But the bitterness does grow the more you drink and by the last sip, it’s finely balanced.

I still feel there’s something missing from the flavours though, maybe more dark malt (rather than hop) bitterness to run shoulders with the sugars.

As with Zero Fear Beer’s close relation, Nirvana’s stout, the presence of worty flavours gave me a poor first impression.

But, once I got past this, I quite enjoyed its mix of flavours, especially the liquorice and coffee.

If you’ve got an open mind (and dare I say, zero fear of trying something new), give Zero Fear Beer a go. 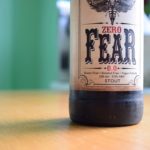